Forever Lost is a series of games developed by the studio Glitch Games.  It’s an apt name.  Throughout the series there were numerous issues that cropped up.  For me it was nothing that couldn’t be solved by rebooting or just ignored – such as picking up multiple copies of the same object, or the screen getting frozen – but there are reports online of more serious, game-breaking bugs.  We’re talking about the loss of save files, no visuals on the screen, and constant crashes on start up.  As this isn’t a free-to-play app, this is worth considering before investing in the bundle of all three games straight away.

The story is told out in a trilogy of three games, with the plot being drip fed slowly throughout the three.  In the very first game you wake up in an abandoned hospital, with no memory or who you are or why you’re there.  What you do have, though, is the sense that somebody is watching, quite possibly holding a clipboard.  That lab rat feeling only increases as you work your way through the series of puzzles set up for you, trying to firstly to escape and secondly piece together what in your past led you here in the first place.  Any time you think you’re close to escaping, you’ve only reached another deeper layer of the maze.

In each game, the game world gets bigger.  In the first game, there’s only one location to explore.  The second game gives you access to two new areas, with a much longer play time.  The games increase exponentially, so by the third game you have multiple areas to travel back and forth between.  This does mean that by that stage there’s a lot of backtracking, trying to locate a puzzle that came up over two hours ago.  There is one feature that helps to reduce this, and this will be explored later on.

It’s not only the size and length of the games that increase with each instalment.  Each game is a level up in difficulty.  The range in difficulty does mean that players will enjoy each game a different amount.  Personally, I found the first game to be straightforward (with a couple of notable exceptions), the second game making me think a bit more.  As the third game was another step up in difficulty, it became closer to an exercise in frustration, but by this time I was invested enough in the story to continue through – with the liberal use of the in-game hint system. 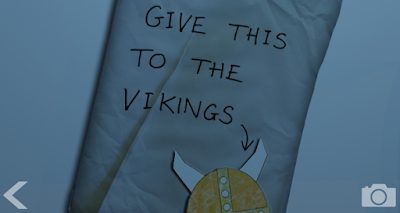 This puzzle.  This one puzzle.

The way the hint system is integrated into the game may be divisive.  In the first two games the hints can only be accessed by exiting the game back to the title screen.  This meant it felt more of a conscious decision to close out the game and choose to take a hint.  Some players felt that this disrupted the game, while I liked this as I found myself sticking with a puzzle, refusing to give in and seek help.  In the final game the hint system is revised to be a lot more streamlined – it’s accessed from inside the game, and you can tell which clue matches to which puzzle, rather than clicking blindly and hoping that “Hint #90” matches up to the part of the game you’re stuck on and accidentally spoiling a future puzzle.

One feature that the game has is the Camera, which allows you to take screenshots in game.  This was barely needed in the first game, where the small setting meant that the puzzles and their respective solutions were never far apart.  From the second game onwards, this feature was invaluable.
Seen something that will obviously be a solution to a puzzle you haven’t encountered yet?
Take a picture.
Seen a lock that will need a key, but worried that you won’t remember where it’s located?
Take a picture.
Need to remember a five-part sequence?
Take a picture.  Take five pictures, if need be.
The photo album feature allows you to maximise the pictures to write notes on them, or minimise them to refer to multiple pictures at once while continuing the story.  The camera feature is brilliant, and should be adopted by all games of this genre.  I can already see myself tapping on the right hand corner of the screen in future games for a camera button that doesn’t exist anymore.  The one (minor) downside of the camera and photo album is the lag.  There’s a definite delay between selecting the photo album and it loading, which usually leads to opening, closing and opening it again.  Patience is definitely required.

This series is well worth a look.  There are issues, such as the glitches, which may affect you to a greater or lesser extent.  In my time with the series I was lucky in that they were small, occasional errors.  The other unavoidable issue is the ramp up in difficulty across the games.  Depending on your own preference, it means either a slow start that risks losing your attention, or the final game turning into a long slog to the finish.  If you’re not convinced, why not try downloading the series’ prologue, Cabin Escape.  This is a short, free app set before the main games, which will give you a taste of the series and at the very least a clue as to whether the apps will have any trouble running on your tablet.

Forever Lost is available on iOS and android, along with other app stores
£8.99 for the complete series