The Silent Age was created by House On Fire, who released the game’s first episode in 2012 and the follow-up in late 2014.  This second episode concluded the story and is consequently significantly longer than the first and no longer free to play.

The game is set in the recent past, following the exploits of a janitor named Joe.  Joe works happily at a scientific research and development company that definitely isn’t sinister or mysterious.  This lasts until the day the game begins, which just so happens to be the day that that he stumbles across a device that can transport people through time, and becomes a wanted man in the process.

You don’t come into possession of the time travel device until the end of the first chapter.  The next chapter is spent introducing you to the future world that Joe has teleported himself to.  The future in this game is fairly bleak, being littered with corpses and the shells of burnt out cars.  Still, it makes a pleasant change from some of the 70s wallpaper that’s inflicted upon you in the game’s present day.  The time travel device has its limitations, as it can run out of power and needs to be recharged, and when it’s working it’s only able to transport Joe between two set time periods.  It’s also only capable of moving you in time rather than the space, meaning you stay in the same place. 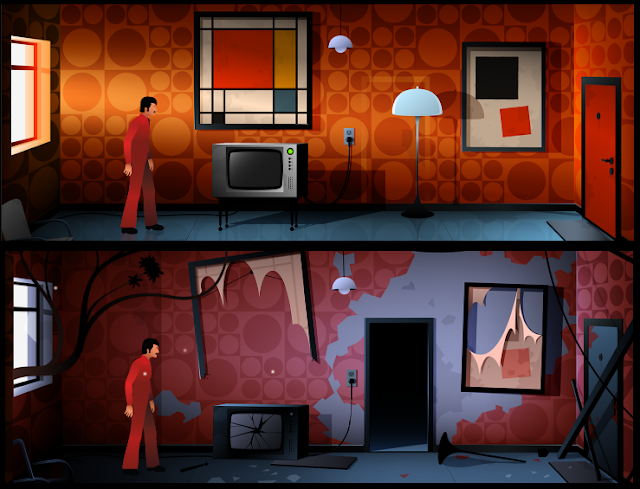 It’s not quite the TARDIS.

It’s not until the third chapter that you get the ability to move freely between the two time periods.  In order to solve the puzzles and progress, you’ll need to shift between the two, and this is when the game starts to come into its own.  You’re able to bring items in your inventory back and forth between the two times, and it’s this that will help you to solve almost every puzzle.  For example, it may be that you need to get past a door in the present day.  In that point in time, the lock is sturdy and won’t be broken any time soon unless Joe has a bolt cutter stashed in his inventory.  Which he doesn’t.  Jump forward by forty-odd years, however, and you’ll encounter the same lock, but this time it’s more rust than metal.  Once the lock is dealt with and you’re through the door, you can then jump back to the other time, where you’ll find yourself on the other side of the door even though the lock is still intact.

Although you can bring objects with you when you jump back and forth between times, you never have much in your inventory at any given point.  If you’re able to pick up an object, this means that it will almost certainly be needed to solve the very next puzzle and then be discarded.  This means that the scope of the game feels quite small, unlike other point and click games where an item may be carried around for half of a game before it becomes useful.  To solve any puzzle you never have to look further than your immediate surroundings.  There’s limited lateral thinking needed as, even with the two time periods to explore, there’s still only a limited number of things around that you can interact with.

When it comes to moving and interacting with objects, the mechanics of the game can be fairly annoying to use.  To travel around, you tap where you want to move to, and good old reliable janitor Joe will slowly but dutifully make his way over there.  You can increase Joe’s speed marginally by double tapping, causing Joe to break into a kind of gentle trot, but this doesn’t have much effect as he can only ever run the length of the screen before stopping to await further instructions.

The most common criticism of the first game is that it’s not long enough.  The game is only five chapters long and, as mentioned earlier, it’s not until chapter three that you’re able to use the time travel device properly.  As the first episode is both free to play on iOS and on the short side, it isn’t an investment of either time or money.  It’s worth treating this episode as a free trial before making the decision on whether to purchase episode two, which is considered by most an improvement on the first.  Although it was a pleasant enough distraction, I didn’t find that the story, gameplay or puzzles gripped me enough to go on to the second part, therefore this review is only based upon the first episode.

The Silent Age is available on iOS, Android, steam, kindle fire and windows phone.
The first episode is free, with the second costing £3.99 on iOS and £6.99 on steam