The first thing to say about Escape Game Brighton is that just because they have a room entitled Murder at Brighton Pier, it does not mean that the company is located at Brighton Pier.  This is probably a mistake that a few teams have made, as their website goes to the trouble of specifying this on their homepage.  The game is actually situated about a fifteen minute walk away from the Pier, in the corner of Regency Square.
The second thing to note, once you’ve actually found the location, is that you’re out of luck if you’re a wheelchair user.  Actually anyone who wants to visit is fairly short on luck, but people who use wheelchairs are particularly so in this instance, as the company is located at basement level.

Once down the steps, you’re met by a rather damp and small hallway. We became very familiar with this passage and its various mould formations over the next fifteen minutes.  During those fifteen minutes, the hallway became even more cramped with the arrival of another team, who were there to play the Escape Game Brighton’s other room, Laboratory of a Madman.  Although the confirmation email had asked all players to arrive ten minutes early, we weren’t even allowed into the waiting area until five minutes after our game was supposed to have started.  It was at this point that the host of the game disappeared to go and set the two rooms back up after their use by the previous teams.  After this we had to wait for the other group to pay, and then sit through an explanation of the other room’s backstory.

All of the escape rooms I have encountered up to this point have built in enough time between sessions to show one team out and reset the room without it impacting the next team.  Also, while it’s common practice to run more than one room at once, the start times are usually staggered to allow the host to provide more attention to each individual team.  These all seemed to be organisational issues with the company itself, and I was still willing to give the game a chance.

The game is based around a true story known as the Brighton Trunk Murder, which occurred in the 1930s.  While this cheerful little case was never solved in real life, in the game you’re tasked with finding out the identity of the killer.

We were shown into the room a mere twenty minutes late.  The game is advertised as an ‘Agatha Christie style murder mystery’.  It’s entirely possible that the company took a look at the cramped, damp, dingy space that they had to work with and decided to fit the fit the theme to the room rather than the other way round.  After five minutes or so the smell of mildew had stopped being quite so noticeable, but unfortunately the cracks in the plaster and the damp patches were stubborn enough to remain.

The company had clearly taken advantage of the large number of vintage and second hand shops that Brighton has to offer, and stocked up the room with plenty of vintage props to go along with the 1930s feel of the room.  While this did help make the room feel authentic, there were moments where I didn’t feel like rummaging through the cases and drawers without putting gloves on first.  It’s certainly the first room where I felt like hand sanitiser was needed afterwards.  To be fair, a lot of this wasn’t strictly needed, as there weren’t any clues to be found by delving through pockets or in amongst yellowing scraps of paper, but this isn’t something that you would know until afterwards. 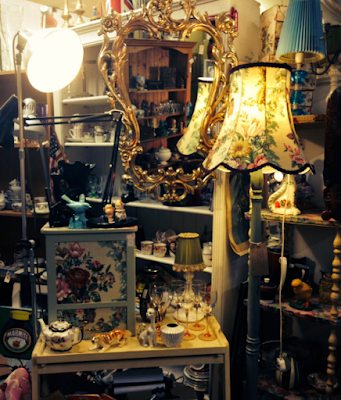 They must have bought out half of Snooper’s Paradise to furnish this place.

Although the room was fairly small (it’s billed as being for 2 – 6 players, but any more than four people would find it rather cramped), there were no shortage of puzzles to keep you occupied for the hour.  One nice touch was that once you had completed your mission of identifying the killer, you had the option of ending the game at that point, or continuing with whatever time you have left to try and solve the final few puzzles to try and find the murder weapon.

The whole room and the items in it felt like it needed more care and attention paid to it.  Besides the dilapidated feel to the room, there was one point where a letter lock was almost unusable as one of the letters had worn off one wheel through overuse.  This turned a straight-forward puzzle from a test of logic into a guessing game.  More annoyingly, it’s something that is so easily fixed, or avoided altogether, if the room is well maintained.

Hints are requested by speaking into a monitor and waiting for a reply by either speaker or a message sent to the tablet that you’re provided with.  This worked well for the most part, but at one point we had no response for a good few minutes.  The host may well have been assisting the other team at this point, but it’s just as possible that he was more invested in facebook or youtube, which is what he was watching both when the earlier team were playing and when we came out of the room.

After finishing a game, generally speaking most hosts will take the time to talk over your experience, asking about the bits you enjoyed and any parts that you struggled with.  I’ve even had people ask for our feedback on if there were any elements of their game that could be improved, as they care about their game and want it to be the best that it can be.  After this game, we essentially had to show ourselves out.  We were probably interrupting his youtube time.

So many people running escape rooms do so because they’re passionate about them, and it always shows through.  Equally, this room suffers because of the lack of care that the owners show to either their room or their patrons.  This company bills itself as the ‘first and only’ escape room in Brighton.  This isn’t true; there are at least two others in the city.  I would recommend seeing what these companies have to offer over Escape Game Brighton.