The game Safecracker offers no surprises in terms of the content of the game.  You don’t play as a butcher, or a health and safety inspector.  You are a safecracker.  You crack safes.

In this case, you’ve been employed by the family of an eccentric billionaire to locate his last will and testament.  All that’s standing between you and the document are thirty or so locked safes.  As you explore the billionaire’s mansion, one thing becomes clear; that man loved him some safes.  Reading the correspondence left conspicuously around the mansion, it also becomes slightly clearer why the billionaire may have chosen to disappear, as his family is revealed to be almost without exception a warren of conniving greedy scroungers.

Safecracker is a puzzle game of the old school variety, being a spiritual sequel to a 1997 game of the same name.  It is unashamedly, unapologetically difficult.  Unfortunately, the game is so old school that your computer may have trouble running it.  Modern video cards seem to have a tough time handling the game, with a common issue being the screen flickering or strobing.  Luckily, you don’t need to pay much attention to the horror stories in the Steam comments section (this is good life advice in general), as the error is resolved fairly easily, with a simple workaround available for Windows 7 if you google the problem.  It does mean playing the game in a smaller window rather than fullscreen, so be aware before purchase if that would be a dealbreaker for you.  If it is, then there’s a version of this game available for the DS which has some slightly different puzzles but retains the same Safecracker spirit.  By this I mean that it’s still going to be DS-snappingly difficult.

There are no hints available within the game, and no hand-holding either.  This is even to the point where there’s no tutorial and the game doesn’t even inform you of how to access your inventory.*  The movement system also takes a little getting used to.  Players have to click the mouse to move in the direction that they’re facing.  Hovering the mouse over any interesting-looking objects will cause it to change shape slightly if you’re able to interact with that object.  The movement system becomes easier to navigate once you start to pretend that you’re playing a slightly more puzzle-orientated version of Google Streetview.

One issue is that the game doesn’t seem to believe in the concept of a difficulty curve.  Throughout the course of the game, you’ll come across maddeningly difficult puzzles, puzzles that look simple but end up being maddeningly difficult after all, puzzles that look difficult but then make you mad once you realise how simple they actually were and, on the odd occasion, actually simple puzzles.  These aren’t affected by how fair along you are in the game – you meet one of the most frustrating safes fairly early in the game.  Cracking safes will give you access to more areas of the mansion, and inventory items that need to be used for other puzzles, but aside from this the game isn’t linear.  You have the freedom to go back and forth between safes.

The red light does start to feel a bit like it’s judging you after a while.

Each safe features a puzzle that could almost be plausible in the real world.  Due to the game’s domestic setting and the realistic goal, this is actually the closest you’ll probably experience to a video-game version of an escape room.  The one difference is that you aren’t going to be solving this one within an hour time limit.

Some of the safes will mean solving mini-games that you will have experienced before in other games.  Examples of this include rotating panels to make a coherent picture, and using magnets to manipulate objects around a board.  This means it’s often easy enough to be able to work out what you need to do to in order to complete any given
puzzle and unlock the safe, but another story entirely when it comes to solving it in practice.  The game is actually incredibly accurate when it comes to the experience of trying to crack a safe, in that you’ll be hunched over for hours staring at a hunk of metal with nothing to show for all your effort. 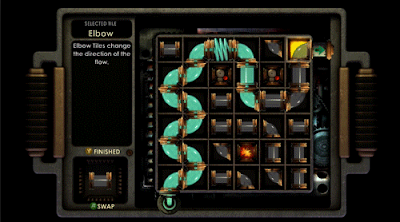 Safecracker is a game from another age.  It may be considered too difficult today, in this era of shortened attention spans and smartphone games that can be dipped in and out of for a couple of minutes at a time, and pay a handful of smurfberries to bypass any level that feels too difficult.  This is a game where you are expected to invest time, concentration and patience.  In return, you’ll be rewarded with a genuine sense of accomplishment for beating it.

Safecracker was released in 2006 by developer Kheops Studio
Available on Steam for PC, and on Nintendo Wii and DS
Priced at £4.99 on steam