Windosill starts with a nearly black screen.  What it doesn’t start with is any explanation, even in passing, about what the purpose of the game is, what your goal is, or how you go about achieving this.

Luckily I’m kinder than the developer of the game, so here’s a brief summary of what your aim is.  In each level there is a toy car.  This car needs to be wheeled across the screen and out through a small door.  In order to unlock the door, you need to insert a small cube into the appropriately-small-cube-shaped hole situated immediately above the door.  You earn the cube by completing puzzles in each room.


I’m continuing my kind streak by not writing the term puzzles in quotation marks in the paragraph above.  However straightforward the explanation of the game seems, the puzzles to gain the cube are increasingly bizarre and surreal. 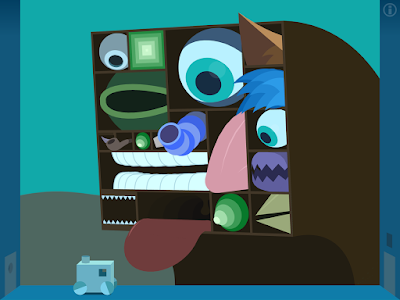 I have like eight mouths and I must scream.

Describing the gameplay is a lot like being stuck at the watercooler in the office listening to someone whose name you can’t quite remember relate the details of a half-forgotten fever dream. “So there was this carousel, right, and I kept spinning it faster and faster, and then all these legs came out of it and kicking as I was spinning and it kept going faster and faster…and then I moved on to this new place where there were all these coloured balls?  Except the balls were really bees at the same time.  I mean they were still balls but, like, I knew they were bees? And these bee-balls were powering the engine.  Did I not mention the engine?  There was this big engine…”

This game was originally designed for PC before being ported to be playable on the iPad, and the game works well with touchscreen.  All of the actions are completed by tapping, or possibly by tapping and then dragging.  This does lead to a situation where any time that you’re not sure what to do next (maybe your bee-engine isn’t powering your leg-carousel), it doesn’t take long before you’re reduced to wildly and randomly stabbing at the screen in the hope that something will happen. 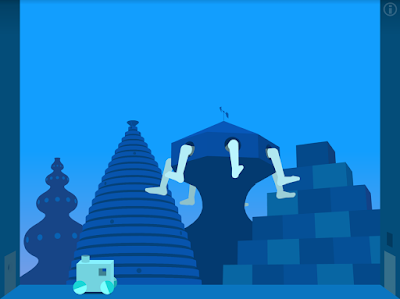 While playing through the game, I wasn’t originally sure who it was designed for.  The description in the app store says that it’s designed for ages 6-8, but it’s likely to lose a child’s attention long before they solve any puzzles – either deliberately or through randomised clicking.  For adults, after the initial period of bewilderment, the game won’t be long enough.  There are eleven levels, which were completed in a grand total of twenty minutes.  At £2.29, I’d consider that a steep fee for a car park, let alone a video game.

It made more sense who the game had been designed for when I read that Windosill was developed as a vanity project for the creator’s own amusement.  This is the sole member of the target audience for the game, and we’re just invited along as an afterthought to peer in a window to his vision.

Windosill’s creator describes it as “equal parts puzzle game, physics toy and living picture book”, and it’s an apt assessment.  While I can’t in good conscience recommend it as a puzzle game – it’s far too short and demented – if you know what you’re in store for it’s an interesting, if brief, diversion from a world where things are expected to make sense.

Windosill was released in 2009 by developer Vectorpark
Available on PC and iOS (iPad only)
£2.29 for iPad and £1.99 on steam