Despite the cartoonish art that looks like it’s been taken straight from a pop-up book, Fran Bow is not a game for children.

The game follows Fran in the immediate aftermath of her parents’ murder, as she tries to escape from the insane asylum that she’s been placed in.  Her plan is, first and foremost, to reunite with her lost cat and then after that make her way home to her aunt.  She’s tormented throughout the game by spectres including Remor, a spirit made up of a goat skull perched atop a billowing cloak.  Having played Year Walk, another horror game of Swedish origin, it does bear the question – what is it with the Swedes and goat skulls?  If it’s not Remor stalking you then it’s the Church Grim.  Fran is a resourceful girl, though, and remains cheerful in spite of everything and full of curiosity at the strange things around her. 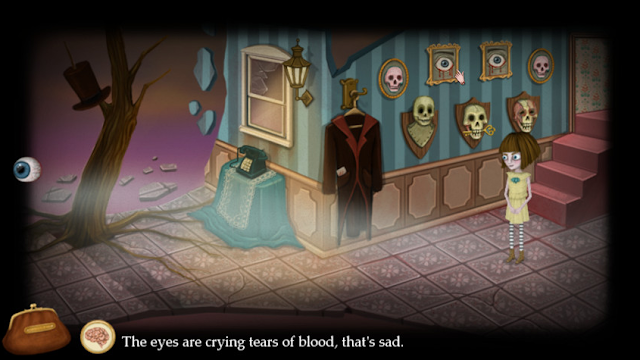 The game is split into five chapters.  It can either be purchased as the full game for PC, or as individual chapters on app stores.  Breaking the game up into separate chapters is a way of getting players to invest in a game when purchasing from the app store, where games tend to have a low price point.  However, as each chapter follows directly on from the last they don’t particularly feel like separate chapters but the one game artificially segmented into five parts.  Chapter Four was so brief that it was difficult not to feel cheated, as you expect each chapter to deliver roughly equal value, but this isn’t something that I would have felt if it was a part of the one package.  There isn’t much different in the overall cost of buying it as one game or in chapters, so it’s up to each player to choose what they prefer.

The mechanics of the game are that Fran can move between different realities in her quest to escape the asylum and reunite with her cat.  This reality-hopping is usually thanks to the medication that the doctors are trialling her on to combat the psychosis that they believe that she has (although Fran insists that she’s perfectly rational thank you very much).  The shifting between realities isn’t always due to the pills though – for a good portion of the third chapter Fran can cycle between the seasons at will, thanks to a magic clock given to her by a talking root called Cogwind who…okay, maybe the asylum is right about Fran’s mental state.

It’s not always possible to tell which of the realities that Fran is switching between is real.  In the second chapter ‘reality’ involves sorcery, twins conjoined by magic and talking frogs.  The reality that Fran reaches by taking a dose of her pills, on the other hand, doesn’t show anything near that fantastic.  It shows her waist deep in murky water at the bottom of a dark, flooded well.

It’s never clear if Fran is actually falling deeper into psychosis, or if there is something else magical at play.  It’s up to each player to decide which parts are real and which are hallucination, if any.  The game will be compared to Alice In Wonderland, The Wizard of Oz, and the other standard tales where a young girl is lost in a fantastic world and wanting to return home.  But while there are similarities, Fran Bow is far closer to Pan’s Labyrinth, a Guillermo del Toro film where a young girl retreats into a dark fantasy realm of her own to escape the harsh reality of her day to day life.  Whatever you end up taking away from the game, you have to come along for the journey and accept what’s in front of you to progress through the story.  It doesn’t matter if you don’t believe that the skeleton would really be riding that bicycle to power the flying machine – that’s what Fran is experiencing.  You’ll have to solve the puzzles in front of her and choose later if you want to take the game at face value or look for a deeper meaning.  If you’re looking for a clear cut answer, you won’t be getting it from the game’s creator, who’s been silent on the matter, including the game’s ambiguous ending.

This is one of the less creepy rooms from the first chapter.

Although there’s no doubt that it’s an adventure game, there aren’t that many traditional puzzles to be found.  The majority of the game is made up of fetch quests and gathering items to use or combine with other objects.  From the second chapter onwards, there are a couple of occasions where the item that you need is hard to pick out on the screen.  If you do get stuck, backtracking and speaking to earlier characters or showing them items you’ve collected often advances the plot.
The first few chapters also feature a mini-game to close out the episode.  These are based on classic arcade games such as Frogger.  It’s another thing that could divide players, but fortunately if you don’t appreciate the different gameplay and style of the mini-games then they’re skippable without penalty.

It would be easy to dismiss Fran Bow as a game that relies on shock value.  The first chapter – and the one that most of the promotional material that you’ll see is from – does have a very dark feel.  There’s a lot of macabre imagery and gore, but that’s not all there is to the game.  Sure, you’ll see a lot of entrails, but it’s not needless or gratuitous violence.  Also, these images don’t reflect the whole game, which moves closer to fantasy as the game moves on and Fran either enacts her escape plan or descends further into her own psychosis, depending on your take on the game. 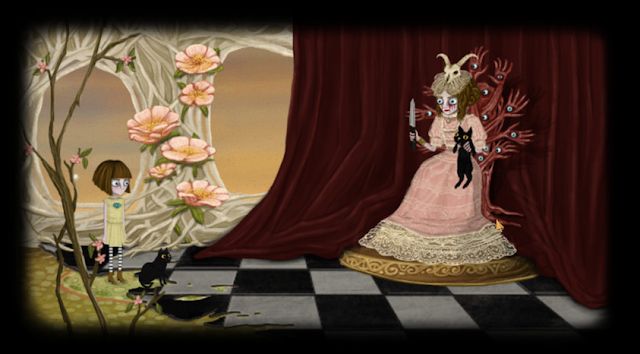 Not too far into fantasy though.

Whether taken as one whole game, or the shorter chapters taken on their own merits, Fran Bow is a game that’s worth playing.  You’ll accompany Fran on her journey to deal with her own grief.  The game will leave you thinking about it for a good while afterwards as you decide which parts, if any, happened as they were presented to you.

Fran Bow was released in 2015 by developer Killmonday Games
Available on Steam, GoG, the app store and google play
£10.99 on Steam, or £1.99 per chapter on the app store

Fran Bow is on 20% off on Steam at time of writing.