Monument Valley is a soft lullaby or fairytale of a game.  It features a wandering princess seeking to make amends for some past sin, enigmatic guides that speak only in riddles and, of course, the bothersome crow people.  It’s well worth your time.

The game involves guiding the main character, Ida, though a land of bizarre and impossible architecture.  To do this, you manipulate, rotate and otherwise change the geometry of the world around her.  You’ll find yourself walking her up walls and sending her through doors that weren’t there a second ago into back to front, inside-out realms that will probably collapse back in on themselves the second that she’s left again.

Everything, from the minimal story, the artwork that means every screen is worthy of a poster, and the melodic music combine to make playing this game a calming, zen-like experience.  The game is almost dream-like in the slow, contemplative, inevitable way that it plays out.  Much like a dream, it follows its own consistent logic and structure in its puzzles, even when that puzzle involves knotting a wall back around itself.

M.C. Escher would be proud.

Everything in the game is minimal – invoking the saying that perfection is achieved not when there is nothing more to add, but when there is nothing left to take away.  This ethos also extends to the menu system, which is nothing more than a scattering of pictograms.  Fortunately, it’s not only the puzzles that are intuitive.  There’s no tutorial as such, but the opening few chapters lead you gently through the first few challenges, introducing you to how you can manipulate and shape Ida’s world.  This slowly builds all of the skills that you need to explore, guiding softly rather than forcing players to sit through an unskippable, regimented tutorial sequence.

The movement in the game is just as fluid and intuitive as the rest of it, and you can cancel Ida’s travelling at any time (unlike in some games) so you’re never taken out of the game by any sense that you’re battling with the control system.

In fact, this game is in many ways the polar opposite of Machinarium.  The game is never frustrating in its puzzles, and there’s no inventory to be cluttered up.  The art style of Machinarium tells a story in rust brown and grey concrete, whereas the visuals in Monument Valley are clean and fresh and sharp.  The main characters couldn’t be any more different.  Here, there are no idle animations or quirks to lend Ida a personality to call her own.  She is as close as a blank canvas as it’s possible to be – she’s literally faceless – but by the end of the game I felt an almost paternalistic need to guide her towards achieving her goal.  It’s also an impressive game that manages to make me feel emotion for a near inanimate stack of cubes.

It’s possible that some of you are worried at this point that ‘intuitive’ is just another word for ‘easy’.  It’s true that the game’s difficulty curve takes a while to ramp up, and even on the odd occasion that you get stuck, it doesn’t feel frustrating and you can usually reason your way through quite quickly.  The game consists of ten chapters, and these are very distinct from one another.  Some focus on the story, such as it is.  Others are more self-contained and focus on the architecture and how to navigate it.  Some feel more driven by the narrative, and in these levels it does feel as if you’re walking Ida towards the next set piece rather than the level being driven by the puzzles.  Even in these chapters, the game is charming enough that it’s likely you won’t mind being led.

The only criticism of the game that I have to offer is that it’s very short.  It can easily be played through in one sitting and leave you wanting more.  However, it’s a wonderful world to spend time in – and I mean wonderful in the sense that it is full of wonder.  To mitigate this criticism, there is extra content available.  The first expansion is called Forgotten Shores, and is almost as long again as the original game, with the final level being the most complex of any so far.  The other DLC is shorter, but is offered at no cost, only suggesting making a donation to charity. 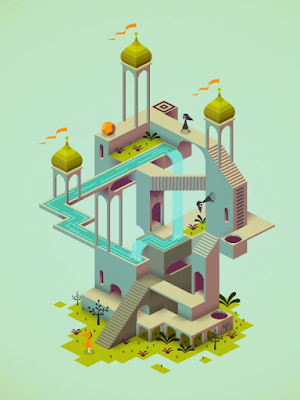 It’s worth saying one last time; this is a super pretty game and you should buy it.

It may only be a brief visit to Monument Valley, and the puzzles may not be overly taxing.  However, it should be considered as a refreshing sorbet to cleanse your palette between longer games.

Monument Valley was released in 2014 by developer UsTwo Games
Available on iOS, android and Windows Phone


Totem picture created by Talik13 and the original can be found here.