The title of ReD is actually, “ReD – It’s a game!  It’s a puzzle!  It’s unbeatable!”  As a mark of respect for a game, its full title should really be used, but there are a couple of reasons why that’s not going to happen in this case.  Firstly, that title is wildly inaccurate and possibly libellous to both puzzles and games.  Secondly, repeating ‘It’s a game!  It’s a puzzle!  It’s unbeatable!’ three times a paragraph is going to drastically bloat the word-count for a game that doesn’t deserve to have all that much said about it.  Finally, and most damningly, I don’t actually have any respect for this game.

Despite its claims, ReD really isn’t a puzzle game.  There are no puzzle elements to be found besides trying to figure out how to battle your way free from the labyrinth of adverts.  These load as soon as the game starts up, were unskippable and refused to be closed, despite the tantalising [X] in the corner of the screen.  Adverts for one product overlapped with trailers for another, to form a kind of unescapable mosaic of capitalism.

It got to the point that I began to wonder if this game was much smarter than I had given it credit for, and escaping from the adverts was the actual game.  Maybe each advert needed to be closed in a specific way – holding the iPad upside down while clicking with your left hand by the light of a full moon, for example.  It took many attempts at clicking, swiping, swearing and reloading, along with several unwanted redirections to the app store, before I was actually allowed to spend any time with the game itself, and I still don’t know what I did to manage to get back to the main menu.  I think I spent longer trying to escape the clutches of the demos for third rate Candy-Angry-Farm-Bird-Crush-Ville clones than I did playing the actual game.

The game itself is very simple.  There is a circle that spins.  The aim is to tap the screen at the right time to place pins on the circle.  If the pins are placed so that they overlap or touch each other then you have to restart the level.  The circle will change the speed at which it rotates, along with the direction, to make it more difficult.  If you win, you are rewarded with a fresh circle and a new collection of pins to stud the circle with until it looks like a spinning cartoonified version of the Hepatitis C virus. 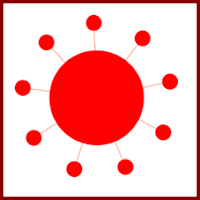 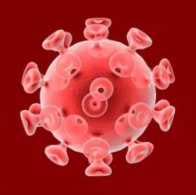 This seems to be the full extent of the game.  I made it to the fourth level before the final spark of interest guttered out.  The game isn’t ‘unbeatable’, as it claims to be – it’s just dull.  There’s a chance that it may suddenly get more interesting at level 5, but it’s doubtful.

It’s not that there’s anything wrong with the kind of game where you have to time your placement of objects on a screen; it’s just that it can’t be considered a puzzle, which is what it’s chosen to present itself as.  It’s a test of the player’s reflexes, patience and also of their phone’s battery life.  If you really need this genre of game in your life, why not try Tower Match on Facebook messenger games instead?  That has more fun and varied graphics, you can compete with friends and it has that addictive quality that good stacking games need and ReD lacks. 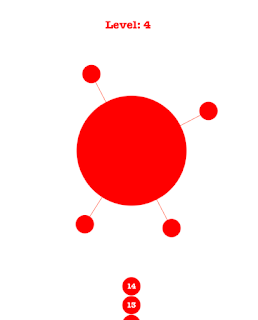 This game is so uninspiring I’m struggling to think of a caption.

ReD does not deliver on its promises.  There is barely any gameplay, what game there is cannot be considered a puzzle, and they seem to have confused ‘unbeatable’ with ‘unplayable’.  What ReD actually is, is a vehicle for delivering adverts to the unsuspecting.  What’s more, you get to pay for the privilege of being advertised at.  This was downloaded for £0.99 in the app store on the off chance of finding a diamond in the rough, but it’s not worth even that.  Save your money.  For £0.99 you could buy one and a half Twixes, and with that you’d get more entertainment, and they’d last longer too.

ReD was released in 2015 by developer dave van der klugt