The Forgotten Room is another offering from Glitch Games, who previously created the Forever Lost series.  It’s kept all the good elements of that series (such as the incredibly useful camera feature) and, even better, they’ve ditched the glitches that plagued their last series.

The game opens with a real Noir feeling, complete with saxophone in the background and the silhouette of a client arriving at the frosted glass door of the Private Investigator’s office to offer him a case he can’t refuse.  Unfortunately they miss an opportunity to call anyone ‘dame’.  This introduction explains both how to use the inventory and the plot of the game.  The Private Investigator privately investigates supernatural events.  His services are engaged by a woman who’s desperate enough to find out what happened to her missing daughter that she’s willing to overlook her scepticism of the paranormal.  Her daughter went missing in the family home, which has a history of unexplained disappearances, of which young Evelyn Bright is only the latest.

A Noir take on a puzzle game is something I would enjoy playing, and there are a good few out there, but after that brief introduction the Noir elements evaporate and what’s left is a good old fashioned ghost story.  The Private Investigator is spending one final night in the house before giving up on the investigation.  His audio recording equipment is set up to catch any unexplained bumps in the night, and he should have enough batteries for his flashlight to last until morning… 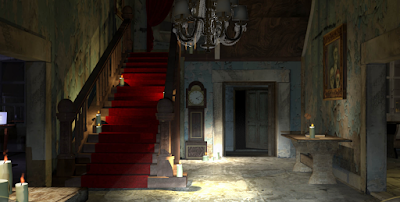 I know that there’s a housing crisis and everything, but still.  This is not screaming ‘home sweet home’.

Atmosphere is something that Glitch Games does well. As you explore the house, the tension slowly builds as you wait for a jumpscare that refuses to come.  It slowly becomes apparent that there’s another presence in the house besides you, and it’s not clear if this presence is trying to help you or scare you away.  There are certainly a lot of warnings imploring you to leave while you still can, but the presence is also instrumental in helping you solve the puzzles that draw you further into the mystery, along with further into the house itself.

When you start the game, the house is made up of locked door after locked door.  Many of the puzzles are focused around getting the keys to unlock these, and you’ll also find that doors you’ll swear were locked last time you checked are suddenly open.  Objects will move between you going into rooms, and you often need to backtrack to rooms that you had explored previously to find that something has mysteriously changed.  This is usually something that will lead to you being able to solve a previously unfinished puzzle.  The game signals the changes fairly well, often by using the music.  There’s a reason that the game recommends headphones, besides the creepy soundtrack. The Private Investigator is either far braver than most people, far stupider, or has an obsessive dedication to puzzle solving.  Most people would be sprinting for the door before the warning to leave had even finished daubing itself across the wall in blood, but he shows an impressive perseverance in trying to find the missing girl. 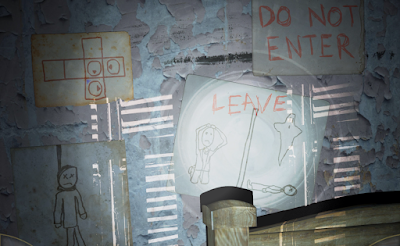 When coming to download the game, many of the comments on the app store warn that they were disappointed with how long it lasts.  I didn’t find this at all – there are many puzzles to work through and new areas to unlock.  It’s comparable in length to other games in the same price range, at a couple of hours playtime, and during those few hours the story and puzzles are of a high standard.

The puzzles are varied throughout the game, and the most difficult was probably the very first one.  It took a while to get any purchase on that first puzzle to open the briefcase, but once you remember Glitch’s way of thinking then it starts to become easier.  It’s their traditional wordplay where the clue seems incomprehensible while actually being annoyingly literal – anyone who remembers the instruction to ‘give this to the Vikings’ from Forever Lost III, or the puzzle from Cabin Escape which directs you to ‘use the hammer on the box’ will recognise this.

The weakest element of the game is the interface.  It’s easy to take a picture with the camera when you meant to open the photo album, and navigating around the house with the arrows can be tricky.  There was one room within a room towards the end of the game that I missed altogether.  Moving between screens is usually done by arrows at the sides and bottom of the screen.  Every time you enter the master bedroom, though, you enter some kind of one-way system and become unable to backtrack through the doorway that you’re still standing under and you have to circle back round to the landing area.  They’re petty complaints, but nothing is more effective at breaking the atmosphere that they’ve worked so hard to create than making the player struggle against a fickle control system.

This is a solid stand-alone game that doesn’t outstay its welcome.  The story moves along at a good pace and builds in tension throughout the game until it reaches a satisfying conclusion that doesn’t let down the narrative that it had been constructing.

The Forgotten Room was released in 2016 by developer Glitch Games
Available on iOS, google play and Amazon
£1.99 on the app store