Spotlight: Room Escape is a free to play app that offers in-game purchases.  The puzzles are interesting, there’s a rough semblance of a story if you squint, and the art isn’t of a fair quality.  It’s decent enough, to the point where that sentence doesn’t even get ‘…for a free game’ tacked on afterwards as a backhanded compliment.

The aim is to escape from wherever it is that you’re being held, and maybe even find out more information on who you are, who kidnapped you and why.  The game is divided into lots of small chapters as you work out how to escape from each area.  However, the game isn’t finished yet.  Not in the sense that it’s a playable beta*, or that it suddenly cuts off to a blank screen midway through a puzzle, but that new chapters are being added regularly.  It’s quite interesting to see how the game evolves and moves away from the beginning chapters, which are very brief, and develops into longer and more complex levels.

The bite sized early levels of the game mean that it’s easy to dip in and out of at first.  Each chapter is also timed, and the first one even has a rather conspicuous countdown timer on the wall.  At the end of each section you’re marked on the time that you took to complete it, and ranked against other players.

Whether you’re a fan of the timing system will depend on the player.  Despite my love of escape rooms, I didn’t like the added pressure that the timer added, and it made me feel rushed and less effective at finding puzzle solutions, as a quarter of my brain was always focused on the ticking of the clock and assessing the speed of my own progress.  Some levels can involve a lot of searching for items that will be helpful in your quest to escape, so the fact that you’re being timed leads to a lot of desperate rummaging through cupboards. 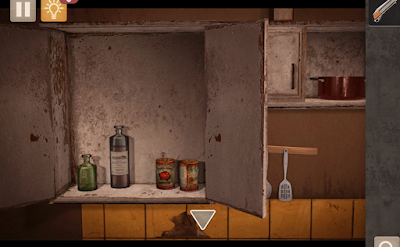 Two empty cans, a bottle and a spatula? MacGyver would have solved this chapter long ago.

As the chapters continue, the game gets more complicated and the thought of being timed falls by the wayside.  There are some later chapters that can take in excess of an hour to complete.  The standard of the puzzles can actually be quite difficult and at one stage the level s became so difficult that it started to lose any sense of enjoyment.  Luckily they seem to have revised the difficulty level back down a bit.

There are many maths-based puzzles to solve, so if you’re not mathematically inclined then you may have some trouble.  There was one number puzzle where I had to resort to watching a walkthrough, and even then I didn’t understand how or why that was the answer.  On another occasion I caught myself doing algebra for the first time since A-level.  Even aside from the calculation puzzles, the game’s lack of direction can mean that it’s not always clear what to do next.  For example, in a few of the early chapters you’re expected to use various heavy implements to break down walls, but there’s never anything to suggest that the wall is breakable or that you need to do this.  A cynical person might suggest that this level of difficulty was to encourage people to purchase hints. 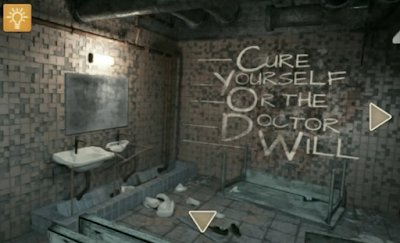 Speaking of hints, I always wonder who it is that leaves the helpful but mildly threatening hints
scrawled on the wall of almost every puzzle game…

Hint packs are available to buy, but you’re not obligated to spend any money and you’re able to progress without hints – but if you want to drop a few pounds to make your life easier and support the developers then you can.  Still, anyone who spends £19.99 to get unlimited hints is the very definition of having more money than sense.  You can also pay £0.99 to get the adverts removed, but as the ads aren’t too intrusive it may not even be worth it.  There’s one small ad at the bottom of the screen and a full-screen ad between chapters.

This is the model of how a free-to-play game should work.  The game is of a decent quality without players needing to spend any money, and then you can choose to invest to give yourself a more enjoyable experience.  It’s nothing extraordinary, but it could be worth your time, and new chapters seem to be added regularly.

Spotlight: Room Escape was released in 2015 by developer JavelinOU
Available on Android and iOS

*For those that aren’t literate in videogame language, beta testing is when the game is still in development.  Games are sometimes released in this state with the understanding that there may be bugs that are still to be fixed.  Think of it like going to watch a play while it’s still in rehearsal.