The Unfinished Swan is a game about exploration.  The main character is a young boy called Monroe who recently lost his mother.  The only thing that he has left to remember her by is a single painting, only partially completed before her death, of a lone swan.  Monroe wakes late one night to find that the swan has disappeared from the canvas, so he follows it into its own world.

Monroe’s tale is told by a narrator, who talks her way through the game’s introduction and the cut-scenes between chapters.  The art style of these is styled to look like a children’s story.  There are also pages of a fairytale to find within the game as you explore.  These pages gradually tell the story of the Kingdom that Monroe finds himself in after following the swan, and the history of the King that founded it.  These are written and drawn in the same style of a children’s story, and are narrated by the same voice.  It’s a gentle, motherly voice and suited to reading out the bedtime story of the beginning and downfall of the Kingdom, but it’s still a little jarring to hear an American voice rather than British. 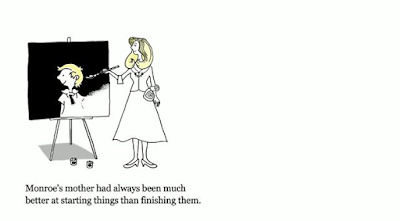 The fact that this is a fairytale means that the mother was pretty much
contractually obligated to die in the opening.

The art style of the cutscenes and fairytale pages are charming and simplistic, but they are nothing like the actual levels of the game that you play through.  The first level after Monroe has followed the Swan into the empty painting is, appropriately, a blank canvas.  You are met with a white screen.  It’s not that there isn’t anything there – there are walls and a ceiling and staircases and furniture, but everything is white on white as if Monroe is suffering from a severe case of snow blindness.  Rather than wandering around blindly rebounding off walls, you can throw paintballs to help find your way.  Spattering black paint creates definition in the world around you and you can start to make out your surroundings.  If you get overenthusiastic and throw too much paint then everything becomes saturated with black and you’ll be back to not being able to see anything.  The trick is to find a balance between the two states to allow you to work out from corners and angles what objects are what.  It’s a simple idea, but it creates beautiful, if stark, scenery. 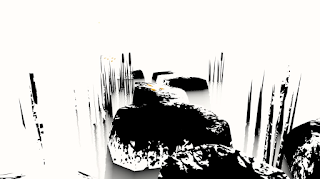 This game is the most peaceful Rorschach test in the world.

As you move through the game shadows and greyness start to creep into the monochromatic world, and after a while there’s even some colour.  Different chapters do different things with the environment and each chapter looks very distinct from the others.  Although the first chapter is visually striking and gorgeous to look at, too much of the same gameplay would be tiresome.  By the time you reach the city in the second chapter you’re able to make out your surroundings without graffiti-ing them and you now throw water balloons rather than paint pellets.   You can then use the water you’re throwing to encourage vines to grow around the city.  One thing that almost all of the chapters have in common is that as you progress through the game and explore, you leave a trail behind you like a large and particularly messy snail.  There are many high vantage points that you can scale and from there you can look back and see the trail of destruction that you’ve left in your wake.  Wherever you travel in the Kingdom you leave an impact and the destruction that you wreak doesn’t get whitewashed away.

The game doesn’t offer any traditional puzzles.  There are no locks to find the combination for and no codes to decipher.  The only puzzle is how to navigate the world that Monroe has found himself in.  It’s reasonably straightforward, and if there’s ever a point where players may struggle or get lost then the developers leave a helpful set to swan footprints to guide in the right direction.  Exploration is both encouraged and rewarded.  There are balloons hidden around the levels to be collected.  Some are on the main path and almost impossible to miss, but most can only be found by exploring.  There are over 60 to collect, and completionists will find the challenge hard to resist.

The levels are huge and sprawling, taking in entire cities.  Although I completed the game prior to the review it still feels like I’ve only scratched the surface.  It’s not clear if this is true or if it’s just good level design.  It may be that a lot of the area is actually closed off to players, but they’ve succeeded in creating something that feels like an abandoned Kingdom rather than one set route through a maze.
This game does have a bit more replay value than regular puzzle games.  Once you’ve solved a puzzle there’s usually little fun to be had in revisiting it until you’ve completely forgotten the solution, which can take years.  In this game, though, there are balloons that need collecting and two extra levels after the credits to unlock.  There are also extra toys to earn.  These don’t cost anything, as you spend your collected balloons to purchase them.  Most worthwhile is the balloon radar which can be used, of course, to find more balloons. 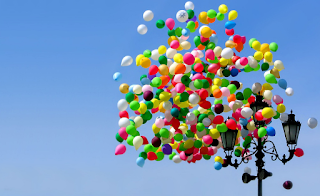 The Unfinished Swan is a game about exploration, navigation and being able to look back at the end of the journey and find that you’re not the same person as when you set out.  It may not be one for fans of the point-and-click breed of puzzle game, as there’s a definite lack of traditional puzzles and a bit too much platforming.*  But the game is worth checking out if only for the art, which is beautiful and one of the main draws of the game.

The Unfinished Swan was released in 2012 by developer Giant Sparrow
Available on PS3, PS4 and PS Vita
£9.99 from the Playstation Store

*A platformer game is one where you have to guide your character around the world to progress the game.  There are typically platforms and obstacles to jump over or across in order to avoid the dangers from the environment or from enemies.