The vast majority of puzzle games are a solitary affair.  They’re designed for a single player who wants to be challenged while they quietly crack codes and decipher riddles.  Keeping Talking and Nobody Explodes isn’t that kind of game.  It’s undoubtedly a puzzle game, but it’s a puzzle game hopped up on adrenaline and caffeine and possibly methamphetamine.  There’s the same mental challenge as most puzzle games, but it’s fast-paced and hectic and involves a lot of people shouting contradictory answers at each other.  It’s therefore not designed to be a solitary game either.  While it can be played with two people, it becomes exponentially more fun the more people join in.

At its core, this game evolved from the kind of team building game where one person is looking at a picture and has to describe it to another person, who then has to recreate the picture without ever seeing it.  This exercise is designed to foster trust within a team and show that everyone has a part to play and the goal can be achieved if everyone works together.  The main difference between that exercise and Keep Talking is that as it’s not a work-based team building exercise you can play it with people you actually like spending time with, and if anyone messes up you’re free to call them whatever names you like.  The other difference is that there’s far more of a risk of someone exploding.  This can be seen as a positive or a negative depending on your viewpoint. 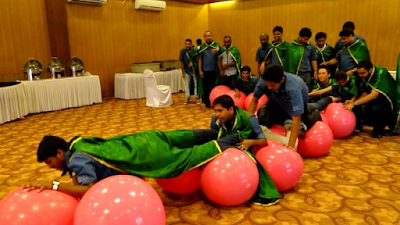 I don’t know what’s happening here but I don’t approve of it and I don’t want to be
a member of any team that takes part in it.

In Keep Talking, only one person gets to interact with the bomb at any given time.  This is either through sitting at the computer screen or by using a VR headset, as the game is compatible with Oculus Rift and Steam VR.  The person looking at the bomb is the defuser, and they call out what they can see to the rest of the players, who are the so-called ‘experts’ and have to work out what the defuser needs to do to disarm the bomb.  The defuser’s job is to describe what they can see as clearly and as quickly as possible, and then be able to follow instructions.  Although they have control of the bomb, they have to put their faith in the other players that they’ve interpreted the manual correctly.

There are different modules on the bomb, and they all need to be disarmed before the bomb is safe.  The modules are each a different mini-puzzle, and they only get disarmed once they’re correctly solved.  This can be by working out which wire needs to be cut, the right password to enter or button to press.  It all sounds straightforward in theory, but the manual is written to be as confusing as possible just to try and trip you up.  Because otherwise where’s the fun?

If the last wire is bluey-green and my mother’s maiden name has a vowel in it then I should cut the wire with a dull pair of scissors using my left hand.  But if the wire is greeny-blue then I need to chew my way through it but only if next month begins with the letter ‘J’.

As the game is designed to trip everyone up, you can expect a fair amount of (hopefully friendly) bickering when it all goes wrong about whose fault it all was.  There are fourteen different puzzles that can come up, and everyone will find that they have different strengths and different weaknesses.  This is why having a group rather than just a pair is more fun.  The more people that are involved means the game gets a lot more fun and the room gets a lot louder.  There does come a point, though, where too many experts just means that there isn’t enough for everyone to do.  Our group found that this came when there were more than five players.

It’s designed to be a party game, so people will regularly be switching in and out of the hotseat.  Fortunately, the developers of the game have been sensible enough to allow the introduction to the game to be replayed at any time, so that people can familiarise themselves quickly with the controls.  It doesn’t break up the game, though, as the controls are simple and intuitive.  Even better for a party game, it’s not one where you have to spend half an hour setting up a complicated board game with counters and statistics and millions of different tokens to lose, and then another half an hour explaining the rules to everyone. 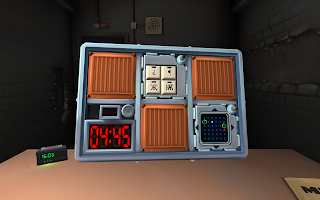 There’s a briefcase – it’s ticking.  It’s going to stop ticking soon and that’s either a good thing
or a really, really bad one.  End of explanation.

The developers also allow free access to the defusal manual, so as many people can use this as you like at one time, as long as you have enough screens or access to a printer.  The manual is available at www.bombmanual.com, which is not a link that I ever thought I would be directing people towards.

Although each level has the same objective, the developers do try and prevent players from getting bored.  There are set levels to work through which slowly ramp up the difficulty and introduce new modules.  Even after you’ve finished these, there’s a free-play mode available.  It’s unlikely that you’ll come across the same bomb twice, as each one is randomly generated.  There are also many mods for the game available through the Steam community, although as that’s outside content their quality may vary.

Unfortunately for introverts and shut-ins who usually have the monopoly on puzzle games, Keep Talking and Nobody Explodes is a puzzle game that’s better shared with a group of friends.  It’s excellent as a party game as it’s fast paced and gets everyone involved, shouting and, ultimately, exploded.

The Unfinished Swan was released in 2015 by developer Steel Crate Games
Available on Steam, Oculus Rift and Playstation VR
£10.99 from Steam