Team ICO was a development team for Sony who created Shadow of the Colossus and ICO, two cult classics of the PlayStation 2 era.  Their games specialised in strange realms filled with abandoned and alien architecture that captures the mysticism of a lost and half-forgotten age, just lying waiting to be explored by the innocent children that stumble into them.  They may not have been responsible for completing production of The Last Guardian, but this game certainly has the hallmarks of a Team ICO story.

The Last Guardian follows a young boy who wakes in a strange and foreign valley, in the shadow of the ruins of an ancient civilisation.  He has no memory of how he got there, or how his skin came to be tattooed with sigils and symbols.  Lying near him is a giant winged creature, chained down and run through with spears.  The boy, rather than running like hell like any normal person would in that situation, probably in the direction of the nearest company that specialises in tattoo-removal, manages to befriend the griffin-like creature and together they try and escape the valley. 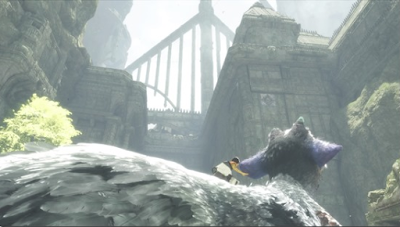 Forget the scenery: I can confirm that there is a button in this game exclusively for petting.

The entire game is an escort mission with a difference.*  Usually the AI character that you travel with is not too far away from helpless.  At best they’re an inconvenience as you need to babysit them throughout the game.  At worst, they’re an active hindrance, wandering into the line of fire when you’re in combat and just generally getting in the way the rest of the time.  Companion characters in recent games have made progress, such as Elizabeth in Bioshock Infinite or Ellie in The Last of Us.  But even though they can be helpful, picking locks and scavenging supplies, they’re still entirely dependent on the player’s character in order to progress through the environment and defeat any enemies.  In this game, the boy and the griffin, Trico, are dependent on each other.  In fact, if anyone is being escorted then it’s the player rather than Trico.

The whole game is made up of puzzles around how to navigate the environment and pass obstacles and Trico is needed to solve almost every single one.  He jumps the chasms around the valley, can reach up to plateaus and rafters and effortlessly leaps over pillars that would otherwise halt players in their tracks.  Trico is also the only one capable of fighting off the enemies in the game, who are singularly focused on abducting the boy.  You’re playing as a young child, which you’re reminded of throughout the game with his half stumbling half running style, and you’re never made more aware of it than when there are enemies around.  You’re able to push them, but the boy’s combat technique is about as refined and effective as an actual pre-pubescent boy would be against an enchanted mobile suit of plate-metal armour.  As the player, rather than fighting you’ll end up cowering behind Trico as he rages at enemies or, better yet, climbing on top of him for a better view of the destruction.

The AI makes Trico feel incredibly realistic, like travelling with a real animal intelligence.  The narration occasionally makes reference to Trico being a ‘terrifying monster’ and ‘man-eating creature’, and Trico really makes this a reality as he rolls around joyfully in puddles, bats at any low-hanging chains and falls asleep while being stroked.  Trico looks like a hybrid between a cat, bird and hyena, and all parts are present in its behaviour.  Cat owners will certainly recognise the determined bum-wiggle whenever Trico is ramping up to make a jump. 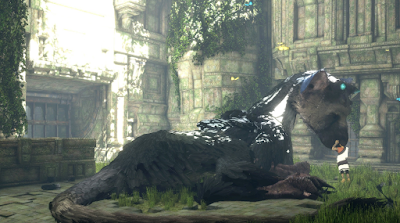 Look at it, the dangerous snarling beast.

Having said that, just like a real pet that you’re trying to train, Trico can be fickle.  You have the ability to call Trico over to you, and eventually even to give instructions when you’re on his back.  They’re always taken more as suggestions than commands though. There will always be occasions when Trico is more interested in walking in entirely the wrong direction, or refuse to co-operate altogether when you're relying on him to make that one crucial jump in order to escape the area that you’re trapped in.

It’s not only Trico that sometimes feels like it’s actively working against you.  The controls are awful, and as all of the puzzles are based on how to navigate around the area in order to escape, it’s a real problem.  Directional jumping is one of the worst aspects, and you’ll often be stuck hanging from a ledge for extended periods of time as you battle the controls.  The game brings instructions for the controls up on the screen for the entire game, but it’s not much help when you're fully aware of what buttons you need to be pressing, and you're pressing them so hard that the controller is starting to buckle, but the game won’t recognise your input.  After the fourth time you’ve squatted down on the same ledge and had to pull yourself back up, the helpful directions start to feel as if they’re taunting you.  The camera isn’t much better, and while it can be manually controlled it still often ends up halfway inside a pillar or giving you a close up view of a rather personal area of Trico.  Who is, incidentally anatomically correct in certain aspects.  It’s another thing that cat owners will be used to seeing.  Usually at 3am only a few centimetres away from their face. 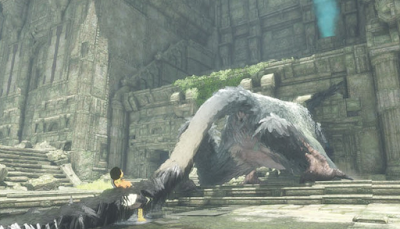 I would 100% buy a Nintendogs crossover of this game by the way.

This game began development in 2007 which, for context, was only the year after the PlayStation 3 was released.  Despite the production cycle taking long enough that many thought this game would never be completed, the finished product was finally released in late 2016.  The PlayStation 4 allows much fuller graphics that fully do the game justice.  The game is beautiful.  Trico has almost every individual feather rendered, and the world that the boy finds himself in is begging to be explored.

The graphics aren’t enough of a draw by themselves, though, and The Last Guardian lives and dies on whether or not you form an emotional attachment to Trico.  All of the game’s flaws, such as the poor controls, can be forgiven if you see Trico as a companion that you co-operate with throughout the game rather than as a collection of pixels, and not every player will want or manage to do that.

The Last Guardian was developed by SIE Japan Studio and released in 2016 by Sony Interaction Entertainment
Available on PlayStation 4
£29.99 from the PlayStation store

*An escort mission in a game is where you are accompanied by another character.  You are responsible for leading them to where they need to go and ensuring their safety.  They are known for being excruciating.