Video Game Review - I Have No Mouth And I Must Scream 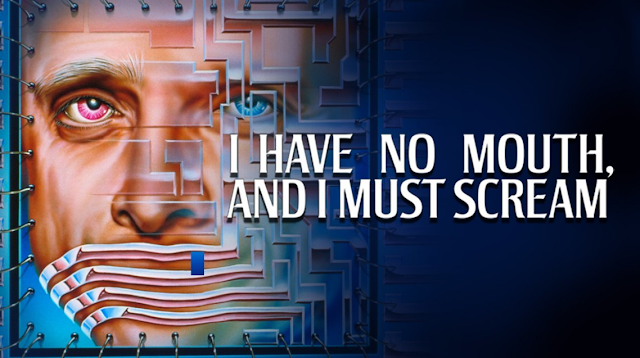 The videogame version of I Have No Mouth And I Must Scream was originally released in 1995, before being re-released in 2013.  While the game is already over twenty years old, its pedigree dates back even further than that, as the game is based on a short story of the same title which was written by Harlan Ellison back in 1967.

If you haven't read the story, it's freely available online and is considered a classic of both science fiction and horror writing.  The story is told by one of the last five survivors of the human race, who are being kept alive by a supercomputer known as AM, just to torture them for its own amusement.  AM controls everything, with the ability to manipulate the survivors’ surroundings, bodies and even their minds.

Many games that are adapted from other sources are a disappointment, both critically and to the creators of the original work.  This game, however, had the blessing and the collaboration of Harlan Ellison.  His vision for the game was one was an unwinnable game with multiple endings, each one bleaker than the last.  The game is close to his intentions, as there are multiple endings, although it is possible – if difficult – to earn a positive ending.

The game opens with AM's famous Hate speech from the novella, where he proclaims the depth of the loathing that he feels for humanity.  AM is voiced by Ellison himself, and it's a chilling speech...but it's also the highlight of the game.  The introduction promises challenges that are spiteful in their level of difficulty, all driven by AM's scorn for humanity.  And the game is downright spiteful, but it's more to do with the broken gameplay and the bugs than anything that AM does. 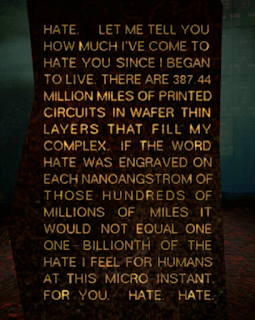 Hate.  Let me tell you how much I’ve come to hate this game.

The game follows the same five characters as in the story, and each character gets their own chapter which fleshes out their backstory much more than in the story.  Each character has a skeleton or two lurking in their closet, and in their chapter they have a chance to either face up to their individual flaws and work past them, or be destroyed by them.  Gorrister, for example, is consumed by guilt over the fate of his wife, who he believes he drove to the point of insanity.  Some of AM’s victims – I mean playable characters – have committed dark sins in their past and are now being punished in a suitably ironic way.  Others (Ellen being the prime example) have only ever been victims of circumstance.

In expanding the character’s backstories, elements have been amended and sometimes changed altogether.  Gone is the gentle, handsome, gay scientist Benny from the novel (although AM did a good enough job of that anyway, as by the time the story is set he’s a wreckage of his former self).  That Benny is replaced in the game by Benny, Vietnam veteran, murderer and potential cannibal, although thankfully that part was removed from the script before release.

No mention of whether AM’s other…enhancements…to Benny were carried over to the game.

No matter what they were guilty of in a past life before the 109 years of torture inflicted by AM, each character gets a karma meter on the screen.  The actions you choose while playing affect this and make the meter rise or sink.  To get the ‘best’ ending for each character and end the chapter with a full, white karma meter, the character needs to face the traumas of their past.  The game does deal with some very mature themes, including war crimes, insanity, rape and paranoia.  The karma meter could be a quite interesting game mechanic, but unfortunately the things that you do that affect your karma meter can be so arbitrary that it might as well be random.  There’s no skill in it besides remembering what you did wrong so that you can avoid it in any subsequent playthrough.  Going back to Gorrister, for example, who’s still stricken over the fate of his wife, he can raise his karma meter by choosing to wipe his hands on a tablecloth.  This is symbolic of his washing away the guilt, I suppose.  To balance this out, later on in his chapter, there’s a jukebox that offers a selection of music.  Each track that’s selected actually plays back a scene from Gorrister’s past, and you’d better be careful which ones you choose.  One will remind Gorrister of a fight that he had with his wife, and down goes the karma meter. 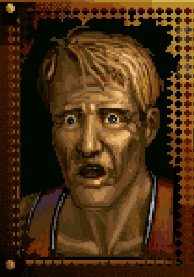 This is both a picture of the karma meter falling and an accurate representation
of my expression when it happened.

The karma meter is never explained in the game, and I found out about it from online guides to the game.  That’s okay, though, because no other aspect of the game is explained either.  Each character begins their chapter with one item in their possession – a book called the Psych Profile.  This gives information on the character’s state of mind and the information it contains changes every now and again.  It turns out that this is actually the game’s hint system, albeit a fairly ineffective and unhelpful one.  Plus, if you read the hints, according to some sources this counts as the character ‘embracing their flaws, which drops their karma meter.

Not only is it easy to choose the wrong option and accidentally lose valuable karma points, it’s also far too easy to choose the wrong action and break the game.  Accidentally doing something out of the sequence that the game expects you to follow, or choosing the wrong dialogue option, can cause you to get stuck with no way to progress the story.  It may be that a scene refuses to trigger, a character leaves never to return, or you’re not able to get an item vital to the plot.  However it happened, it leaves both the character and player stuck indefinitely, with no way to move on until admitting defeat and restarting the game.  Or at least, looking up a walkthrough to try and find out if there’s some crucial step that’s been missed or if the game is actually broken.

Not only is it easy to ruin the game through accidental script breaking, the game often manages to break itself with no need for any assistance from the player.  One annoying bug is the tendency of the main character to disappear entirely after loading a saved game.  Trying to leave the area in the hope that they’ll reappear on the next screen just causes the game to freeze altogether.  Oh, and re-loading doesn’t fix the issue.

If you’re wearing the rose-coloured glasses of nostalgia then it may be worth revisiting the game.  Alternatively, this may be one for you if you enjoy those adventure games from the mid-90s where one wrong move can mean an instant game-over screen. Or, worse, the kind where you find out two hours and four scene changes down the line that because you forgot to collect that one item the game is now unwinnable.

Otherwise, the controls are frustrating, the puzzles are the opposite of intuitive, the game is riddled with bugs and even though this is a re-mastered version the graphics are still 90s-level quality.  I Have No Mouth And I Must Scream is still enjoyed best in story format, rather than trying your best to live AM’s torture through the feeling of impotent rage and despair that the videogame inspires. 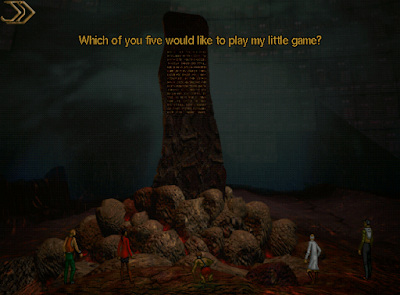