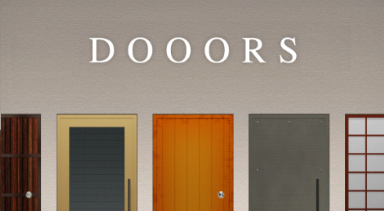 It wasn’t the graphics or the gameplay that initially drew me to this game, rather the title.  And it that way it doesn’t disappoint; DOOORS certainly features an awful lot of doors.
The game has many levels, and each level has one view.  You’re not able to pan around to see anything else.  You are stuck looking at one wall with a door set into it.  That doesn’t mean there isn’t variety though.  Some doors are blue, or brown.  Some have handles and some slide to open.  That’s about the extent of the variety.  One thing they do all have in common is that every door is locked, and you have to solve a puzzle to open it to continue on to the next level and the next door that it brings. 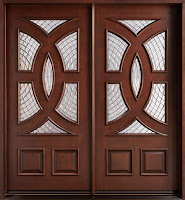 Exhibit A: A door.

The art in DOOOORS is fairly basic and blocky, skirting between 2D and 3D for different objects.  The game’s representation of objects is recognisable, though, and the game is free to download, so it would be churlish to complain too much.

The puzzles come in two flavours in DOOOOORS.  There are those that are incredibly straightforward and obvious, and the other kind where you’ll be stuck staring at the screen for ages before cursing yourself once you realise how just how straightforward and obvious it was.  At worst, the puzzles devolve into jabbing at the screen in the hope that you pick up an item that you hadn’t noticed, or prompt something to happen on the screen.  The worst thing is that it’s actually quite an effective strategy. 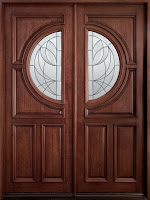 Exhibit B: Also a door.  Easily confused with Exhibit A.

There are many doors to unlock in DOOOOOORS, and obviously an equal number of levels.  The puzzle featured in each level only has one or two steps to complete.  The levels are designed to be blitzed through quickly one after the other, rather than spending the whole of one sitting solving one intricate chapter.

There’s nothing about the plot, art or gameplay that will grab you, so this is the kind of game that’s useful as a temporary distraction so you can work though a couple of levels while on the bus or waiting to board a flight.  Having said that, a lot of the puzzles involve the gyroscope built into your phone.  So it’s a good game to play in transit so long as you don’t mind being the person getting strange looks as they rotate and shake their phone.