Telltale Games is well known for their adventure games, which are highly-regarded adaptations of pre-existing series from different mediums including TV shows, comics and even other videogames.  These series come with their own pedigrees and notable examples include The Walking Dead, Guardians of the Galaxy, Borderlands and Game of Thrones.  Back before all that though, Telltale Games released a small indie puzzle game called Nelson Tethers: Puzzle Agent.  It didn’t feature any of the concepts that Telltale would become known for – such as your choices in the game affecting the direction of the story and how the others characters would treat you, the episodic gameplay or the numerous quicktime events – but Puzzle Agent was a good game in its own right. 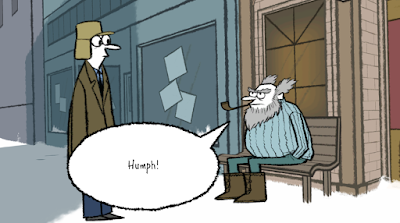 Bjorn will remember that.

The game was created in conjunction with the cartoonist Graham Annable, and the art has a scratchy, hand-drawn quality to it.  This doesn’t detract from the game at all, in fact it’s endearing, and it’s far better to go with an art style like this which conveys emotion through the drawing than aim for high-end next-gen graphics that don’t quite work.  Equally, the game’s story doesn’t take itself too seriously and risk becoming over-wrought and heavy.

The story follows Nelson Tethers, intrepid FBI agent and sole member of the FBI’s puzzle research division.  He’s been sent on his first field mission in a long time, possibly ever, which means leaving the comfort of his own office which is filled with Sudoku and crosswords to while the time away.  The eraser company that supplies the White House with erasers has shut down production and the residents of the town surrounding the factory are all too pre-occupied by puzzles to provide any coherent explanation as to why.  Agent Tethers has to travel out to the rural and snowbound town of Scoggins, Minnesota, in order to find out what’s been going on and, along the way, solve all of the puzzles that the town’s quirky inhabitants have to offer.

It’s not an overly long game, but Puzzle Agent crams a lot of puzzles into the experience.  Each puzzle is quite quick to work through and they all sit in isolation from each other and the main game – rather than interacting with the environment and needing to collect items for your inventory, it’s more like every character that Agent Tethers meets wants help with their homework.  A lot of the puzzles in the game are actually optional and don’t need to be completed to follow the main storyline, and these puzzles can often be more difficult than the main ones.  Luckily, any puzzle you encounter can be backtracked away from and returned to at a later time.  You can also request hints and if you get the answer wrong on your first attempt you can go back and retry.  Hints and multiple guesses just affect the grading which you receive immediately following each puzzle.  If you stumble across the answer but aren’t sure on the steps taken to reach that solution, there’s also an option to explain the reasoning behind the correct answer. 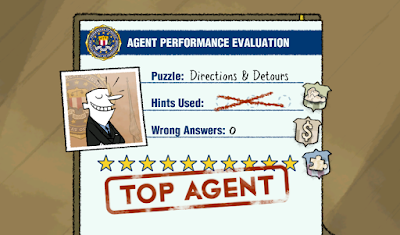 Oh this is going over the mantelpiece.

The difficulty level of the puzzles do spike up and down throughout the game.  It depends on the type of puzzles you prefer and how your brain is wired.  There are a few puzzles that involve fitting different pieces together to make a whole, such as arranging food on a plate so that none of the items are touching each other.  When you’re moving the pieces around, as soon as the edge of a piece aligns with an adjacent piece they automatically clip together.  It makes it ridiculously easy to cheat on these puzzles, but what’s the point?  They’re one of the easiest type of puzzles in the game.

On the other end of the scale, the game features a lot of logic puzzles where you are provided with a set of statements and a list of rules to be adhered to.  You then need to reason out a solution to the puzzle that fits both the scenario and the given rules.  Some people might find this type of deduction straightforward, but to help those people – like me – who struggle, the ability to write or make notes directly on the screen would have come in very useful at this point.

How about next time you and your oddly-shaped companions make my life a lot easier
and just order the sharing platter?

The game has a lot of funny moments, mostly due to Agent Tether’s interactions with the townsfolk.  Most of them are reluctant to talk about what happened at the factory at all, denying any knowledge of the incident (or accident?  Or explosion, allegedly?  And what happened to the factory foreman, Isaac Davner?)  Agent Tethers has to dive deeper into the mystery at the heart of Scoggins if the White House is to have any hope of seeing another shipment of erasers delivered.  For a game as lighthearted as Puzzle Agent, though, there are a couple of jumpscares.  The residents of Scoggins start off as harmlessly quirky but while you’re in the isolated snowy town trying to solve a crime, they decide to start up their best impression of Fargo to the point that you’ll start searching every screen in case there’s a woodchipper positioned nearby.

Does Agent Tethers find out what happened to the foreman and save the day for the White House and, for that matter, anyone who holds shares in the Scoggins Eraser Factory?  Does he make it back to his centrally-heated, cosy office back at Headquarters?  Well, as there’s a sequel to the game set in the same town of Scoggins, it’s a safe bet that there’ll still be some of the mystery left to untangle.


Nelson Tethers: Puzzle Agent was released in 2010 by Telltale Games
Available on Steam, GoG, iOS and Windows
£3.99 on Steam