Board Game Review - Mystery At The Stargazer's Manor

Escape rooms began as a video game experience before making the jump to reality.  Now it’s close to coming full circle, as various different companies are turning the escape room experience into a board game to be played at home.

This game was created by ThinkFun, who have made two Escape-Room-In-A-Box type games to date.  This one is titled Mystery at the Stargazer’s Manor, and asks you to gather your friends in order to explore the abandoned house of the local astronomer. 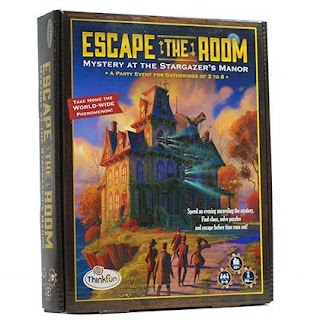 Things go rapidly downhill during all their trespassing and illegal entering.

The game is recommended for between 3 –  8 people.  As with a real escape room, there’s a set time limit you need to beat (which is usually one hour) but with Mystery at the Stargazer’s Manor it depends on the size of your team.  For between 3 – 5 players, the time limit is two hours, which reduces to one and a half hours if the team is any bigger than this.  Of course, there’s no employee hovering and waiting to re-set the room ready for the next team who’s booked in to play as soon as you leave, so there’s no obligation to stick to the time limit if you don’t want to.

The creators of the game have been exceedingly generous when it came to setting both the time limit and the maximum number of players.  We played the game in a team of five, and wouldn’t have wanted any more players involved than that.  Rather than having different puzzles to split up and investigate, scattered around a whole room needing to be explored, everyone is crowded around a single flat space solving one puzzle at a time.  The puzzles often involve quite small pieces, and even with five of us there were a few cases of us getting in each other’s way, and with any more people there wouldn’t be enough for everyone to be included at once.

The time limit of two hours was also more than was needed, but the feeling in our group was that this didn’t matter too much.  Depending on your play style, the game can offer a lot more of a relaxed experience than an actual escape room, and we were joking around at points, rather than paying the level concentration you would usually need.  A real escape room also doesn’t allow you to wander away from the game at any time you like to pay a visit to the bathroom or take the opportunity to freshen up your drink.  Depending on your team, and the amount you’re drinking, this may mean that you need that extra leeway with the time limit.

In case you were wondering, we finished the game in three rounds and about a dozen trips to the bathroom.

The instruction booklet is the first thing that you will come across when you first open the box.  This explains what sections should be read before starting the game, and which parts should be read during the set-up process.  The instructions are clear the whole way through, which is helpful as the game is self-led the whole way through.  After the instruction booklet, the next item to be unpacked is an initial scene card, which sets up the scenario and what your team’s objectives are.

This is taken from the instructional booklet.  You don’t need to stop reading the review.

After that, the box contains five envelopes, which constitute the entire game, and each envelope is only allowed to be opened after correctly solving the relevant puzzle.  When first unpacking the box, it doesn’t look as if there’s anything close to two hours of content, but each envelope contains new puzzles and components and it’s a lot more engaging than it first appears.

The final item in the box is the solution wheel.  As progressing through the game is contingent on finding the right answer in order to be entitled to open the next envelope, there needs to be a way to verify that the answer your team comes up with is actually correct.  The makers of the game have got around this problem by creating the solution wheel, and it’s a neat way to get around the problem of how to make sure that envelopes aren’t opened until you successfully get the right answer when the envelopes are made of flimsy paper, sealed with sellotape and substantially less secure than a padlock that will only open when you input the right code. 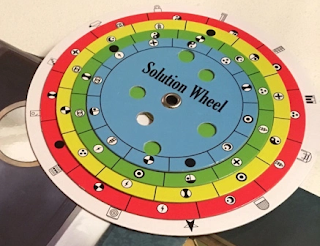 If this didn’t exist then the game really wouldn’t come anything close to the time limit.

The first puzzle in the game is little more than a tutorial to teach you how to use the solution wheel correctly, as it’s crucial to the rest of the game.  Every puzzle involves trying to find the correct combination of symbols which, when entered into the solution wheel, show whether the answer is correct.  However, this method does mean that there isn’t much range to be found in the puzzles.  The same set of symbols appear in every puzzle in the game, and the test each time is to find the right combination.  The game does lack the variety of maths based, physical based and logic puzzles that a real escape room can offer.

The game retails at around £20.00, which is rather expensive for a game that can only be played once.  However, the professionalism of the game continues here, as the hints section of their website provides instructions on how to reassemble the game, and recommends that you pass it on to a friend to try.  Also, when you think in terms of an actual escape room, which is also a one-time experience, £20.00 is more than reasonable – it wouldn’t even cover the cost of one team-member in a London-based room.

Mystery at the Stargazer’s Manor stands out in two ways.  Firstly, it’s well made in terms of the instructions offered, hint system, method for giving solutions and the reassembly instructions.  If these weren’t up to standard in guiding players, the experience could easily degrade into a confusing mess.

Secondly, throughout the review, every paragraph has been littered with comparisons like “If this were a real escape room…”  Well, it’s not.  But then, it’s a much lower price point and there’s minimal travelling involved.  It also involves far less pressure as there’s a longer time limit and if you don’t succeed then nobody will know except for your immediate social circle.  This makes the game an excellent option for if you want a more relaxed experience at home with friends, if you’re curious about trying an escape room but worried that you won’t measure up, or if you’re trying to encourage reluctant friends to join you on your next trip out to an escape room.  This was, incidentally, our reason behind trialling the game and it was wholly successful – they’ll be accompanying us on our trip next month to Escape Room London next month.

Number of times the phrase “Real escape room” was used: 6