Escape Hunt Tokyo is located in the Asakusa district of Tokyo, but it’s hidden away from the tourist-packed market stalls and shrines that the area is known for.  While there’s hardly a shortage of escape rooms to be found in Tokyo, Escape Hunt is one of the few that caters to both Japanese and English speaking audiences.

There are three rooms on offer – a mystery involving a runaway bride, a samurai-themed room and a room with a Zen theme.  As we were in Japan, it seemed only fitting to go for the samurai-themed room. The plot of the room is set in Edo-period Japan, the era of feudalism, geisha, shogun and samurai.  You play as a samurai, and the local shogun that you serve has received a death threat.  Your task in the game is to secure the area and protect his life.  The room is decorated with tatami mats, and to keep authenticity you’re expected to remove your shoes before entering.  Besides that nod to detail, the room is actually quite small and sparsely decorated.  There are wall hangings and sliding doors, but not much in the way of extra decoration – if it’s included in the room then it’s there for a good reason.

The website highlights the focus of each room, with the Zen room described as being centred around ‘searching and discovering things around the room’.  The bridal room’s focus was said to be on mind puzzles and observation, while the Samurai Espionage room was more based around physical activity.  When choosing which room to book, you should think about what aspects of escape rooms you enjoy, where your team’s strengths lie and even the age and attention span of your team.  For example, a team that includes children may prefer a room that involves searching around over a more cerebral challenge.  While I can’t speak for the other rooms, the company’s description is a fair assessment of the Samurai room.   There were a lot of physical puzzles and activities in the Samurai room, including getting to play with one large, very cool and apparently authentic prop. 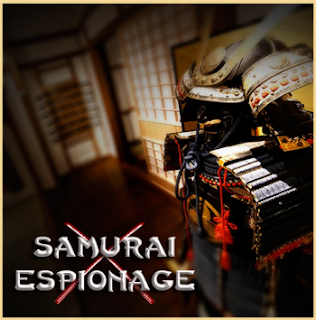 Does…does it still count as a spoiler if they’ve literally got it
featured on the front page of their website?

No understanding of Japanese, either spoken or written, is needed to successfully play through the game.  There is a fair amount of Japanese text, but any writing also has an English translation provided.  There are Japanese numerals throughout the game though, and this creates an extra level of difficulty for English-speakers who will have to spend time translating these.  This goes some way to explaining why every team on the leaderboard was Japanese.  The quickest completion time for the room was 25 minutes, which is almost too quick – if it hadn’t been for the extra time spent identifying and interpreting the Japanese numerals, there would be a lack of content to the room.

The hint system for the room was unlike any that I’ve encountered before.  Rather than hints being provided through writing on a screen, via walkie-talkie or even by text message, there was a buzzer situated near the door.  If you gave in and pressed the buzzer, the Escape Hunt worker monitoring the game lets themselves in and offers assistance.  They then hover uncomfortably for a while before leaving.  It is a quicker and more efficient way to get immediate feedback, rather than being fed hints based on the limited viewpoint that the employee has through the cameras.  Still, it’s incredibly immersion breaking to have them able to wander in, and also gives a real sense of defeat in having to ring the buzzer of shame. 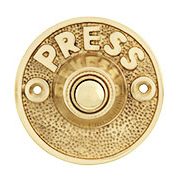 Pictured: the buzzer of shame.

After we completed the room, we were offered tea and refreshments, and then had the photo session standard to every escape room.  The company’s hospitality was outstanding, but it was actually another symptom of my issue with this room.  The photo session in the aftermath of the game featured costumes to wear and props to pose with, including signs with slogans such as Ask me how we escaped! and I’m with stupid!  It all felt very generic and no different to any escape room in the UK.  Although the room featured samurai, something inherently Japanese, there wasn’t really any unique twist to it, which was most of the reason that we’d taken the time to experience how another culture would interpret escape rooms.  There are certain points that are central to the concept, such as the puzzles and a set time limit, but other than that different countries can take the idea in very different directions.  There’s a chance that I’m being unfairly harsh on this room because my expectations didn’t match up to what they provided.  We had been excited to see what Japan, the country that first came up with the concept of escape rooms, would have to offer.  It turned out to be very similar to what we could experience in, say, Birmingham or Slough.

There was a large world map on one wall which was bristling with pins, and underneath there was an extensive list of all the locations where Escape Hunt is located.  It was an extensive list which correlated – if only roughly – with the locations pinpointed on the map.  Escape Hunt is a franchise across the globe, which may be part of the reason why everything felt so homogenised.  The company was professional, all of its employees unfailingly polite and the room was perfectly satisfactory, but there was a lingering feeling that it catered to tourists.  If you’re looking for an escape room to pass the time then there’s nothing wrong with this one.  But if you’re looking for an escape room that offers a uniquely Japanese experience then it may be best to keep searching.

*Around £25 per person at the exchange rate at the time of writing.