Escape Room Review - The Real Escape: Chamber of the Deep

Portsmouth is a coastal city, and so has a long naval tradition.  If you’re visiting the area and want to celebrate this, you could visit the HMS Victory which is displayed in the city, or take a tour of the harbour.  Alternatively, you could pay a visit to The Real Escape, which features a pirate themed escape room.

Chamber Of The Deep is set inside a pirate ship, which you need to spend your hour trying to break into the Captain’s Quarters in order to claim the treasure that’s awaiting you there. 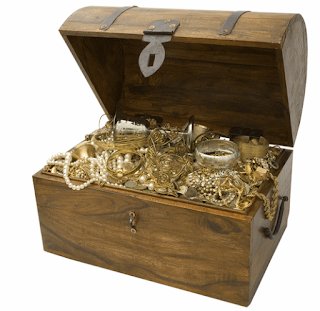 Treasure as in a treasure chest.  They haven't got Johnny Depp dressed up as
Captain Jack and tied up in there waiting for you.

The puzzles in the room are very fun and engaging the whole way through, and all of them tied in well with the theme, with unexpected parts of the set being used as part of the puzzles.  There are treasure maps and compasses to be discovered and used, and a treasure chest to rob, which definitely aren’t spoilers because you’d be disappointed if they didn’t feature in a pirate-based room.  The set and props used were all of an impressively high quality, and they had clearly gone to some trouble to decorate and then source the props.  Some of them looked and felt like genuine antiques.  It really helped with the immersion of the room, but as a result some of the props felt quite fragile, especially those that had been custom-built out of old furniture for the game.  Everything held up though, and as long as the room and its objects are treated with respect then there shouldn’t be any major problems.

A lot of escape rooms suffer from the same problem, where ‘Do Not Touch’ signs are plastered all over the room to the point where the first puzzle is trying to work out by process of elimination the parts that you're actually allowed to interact with.  There’s nothing more immersion breaking than this, but this room almost goes too far in the opposite direction.  It has its fair share of Do Not Touch warnings, but they whisper rather than shout.  They’re so small, and placed so discreetly, that they’re easily missed and there were a few occasions where I was partway through a detailed inspection of something before I realised I was supposed to be leaving it well alone. God knows how it’s stood up to the rowdier Stag or Hen parties.

Jesus, we get it…

The room’s difficulty level isn’t set overly high.  That isn’t to say that it’s easy or that there isn’t enough to do.  We were able to work at a steady pace, and were never stuck for long periods of time, but also weren’t ever in doubt that we would manage to escape within the time limit either. The Real Escape’s website says that their rooms are designed optimally for teams of 5, but groups of 3 – 6 can play.  That’s probably the case if you’re new to escape rooms, but for teams who have a couple of rooms under their belt this room is better for a smaller group, or even a pair.  Again, that is only the case for experienced teams, so don’t enter the room thinking that you’ll be able to waltz out – of all of the teams that played that room the day that we visited, we were the only team to escape in the time limit.

This room is definitely one to try.  The theme promises to be fun, and the room lives up to expectations.  The puzzles are all solid and you can expect to have a good time with a company who know what they’re doing.  The company is professional, and it shows in the little touches like the lockers for your personal belongings and the instructional video you watch before playing.  The difficulty level is the only coda for veteran teams, but even then it’s still worth playing for the experience.

Website: www.therealescape.co.uk
Price:  £21 per person for a team of 3, decreasing from there
Players:  3 – 6
Strengths:  Engaging set and puzzles
Weaknesses:  Fragility of props, difficulty level