Saucer-Like really is the indiest of indie games.  It was birthed on Steam Greenlight, which was a platform where smaller game developers could submit ideas for games.  It also features hand-drawn backgrounds and claims to deal with mature themes for a videogame, such as the individual’s role within a wider society.  That’s not the only ‘mature’ element to the game, incidentally; there’s a fairly explicit sex scene that really wasn’t expected considering the innocent, illustrative quality of the art, and the equally innocent nature of the setting and characters.

The game follows a villager called Yanagi.  His tribe live in harmony with the woods that surrounds their home, caring for the forest and protecting it as it does the same for them.  But autumn is drawing in, and this melancholy feeling resonates throughout the game.  The story begins as the sun rises on the final day the villagers have left before it’s time to complete a ritual to ensure the survival of the forest.  Each villager that Yanagi encounters are coming to terms with this, and choosing how they will spend their final hours before the ritual.

The art is all hand drawn, and its autumnal palette beautifully reflects the sombre mood of the game.  Unfortunately, you may not be able to appreciate the artwork when it’s hidden behind the persistent and recurring error messages. 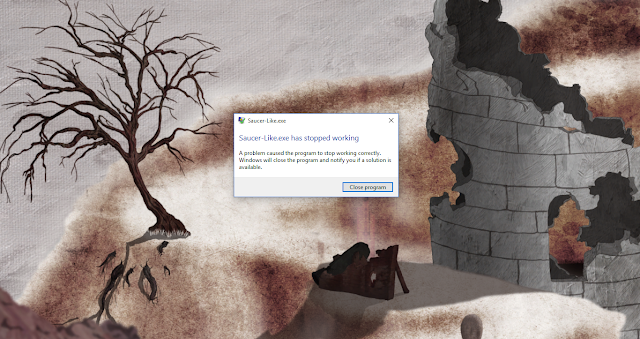 The game suffered from frequent crashes back to the desktop, along with freezing when you try to travel from one screen to another.  The issues did stop when downgrading to a machine running Windows 7 rather than Windows 10.  The game specs don’t warn about any compatibility issues, only saying that the minimum system requirements are Windows 7 or higher, which is something to consider before purchasing the game.

The technical issues aren’t the only problem that might hinder your enjoyment of the game.  Saucer-like was created by a small Spanish-speaking studio, and the English translation was done by one person.  Unfortunately, there are an awful lot of spelling and grammar issues.  It isn’t quite as serious a problem as the constant crashes, but it does make Saucer-like come off as a lot more amateurish than it otherwise would.  Plus, for anyone who cares about grammar, punctuation or spelling, the translation is like a set of fingernails running slowly and gently down an infinitely long chalkboard. 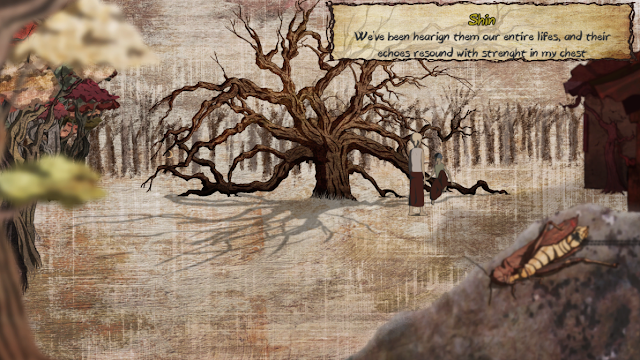 Cna yuo cna raed this?  Tihs is bcuseae we do not raed ervey lteter
by it slef but the wrod as a wlohe.

Having talked about the plot of the game, and the pitfalls in the execution, it’s time to talk about the gameplay.  Saucer-like is billed as having point-and-click style of adventure gameplay, but what it comes off as is a puzzle game that forgot to add in any puzzles.  Most of the challenges posed are solved by talking to the other characters in the game.  The other villagers will direct you to exactly what Yanagi needs to do next, and explain exactly how it can be accomplished.

In the few instances that there are legitimate puzzles to complete, they’re not set up very well. Some of these are caused by the translation issues, but others are down to a lack of foresight by the developers.   For example, although Saucer-like isn’t exactly a long game, placing the tutorial for one puzzle at the beginning of the game with the actual puzzle not being encountered until halfway through, with no way to replay it, is still poor design.  The only way that we got around this was by starting a new game to re-play the tutorial, before switching back to the original save-file.  Then, even when we knew the steps to take, the game didn’t seem to register our input and it was only after five minutes of fairly fruitless clicking out the correct sequence that the cut-scene triggered at random, possibly out of pity at the amount of time it was taking to solve the puzzle.

Depending on each player’s decisions, the game has two potential endings to show the consequences of the choices made throughout the game.  The first, more individualistic ending gives a relatively satisfying conclusion to the story.  The second ending mirrors the first, but a very pruned down and abridged version.  If you’ve chosen to replay the game to see what impact your decisions make, it’s quite a let-down and undermines the game’s whole theme about the individual acting for themselves or working as part of a larger community.  If your decisions turn out to make almost no difference, then what’s the point?

The ending is quite representative of the game as a whole.  While it looks good and the concept is interesting, the game promises more than it’s able to deliver and will ultimately leave you feeling disappointed.

Saucer-like was released in 2017 by developer Fostatina Ediciones
Available on Steam
£4.79 on Steam