The Zero Escape series got off to a shaky start in Japan, after the first instalment in the series, Nine Hours, Nine Persons, Nine Doors was a commercial failure.  It was only due to the unexpected success in the US that the follow-up, Virtue’s Last Reward ended up being created at all.

You don’t necessarily need to have played the first game in the series to enjoy this instalment, which is helpful to those based in Japan, as they most likely won’t have done.  It would be helpful to have some knowledge of the last game though, as the game continues the same themes and references the same characters.  The game does go out of its way to try and explain anything that might be needed for those new to the series, but if you haven’t played the first instalment then be prepared to spend a fair amount of this one in the dark.  But then, as the game features such a labyrinth of a plot, you’ll spend a lot of the game wondering what’s happening either way.

The game opens with the main character, Sigma, waking up in a warehouse with no memory of how he got there and almost as confused as any players who haven’t played through Nine Hours, Nine Persons, Nine Doors.  Sigma is then forced to play a series of games to win points in order to escape.  He and his eight companions are each fitted with a bracelet poised to administer a lethal injection if they break any of the game’s many rules – most of which aren’t explained until after they become relevant.  Throughout the course of the game you play as Sigma as he tries to earn enough points to escape, while also trying to discover where he is, the history of his companions and why they were each chosen to participate in the games, and the identity of the mysterious ‘Zero’, the mastermind behind the creation of the game. 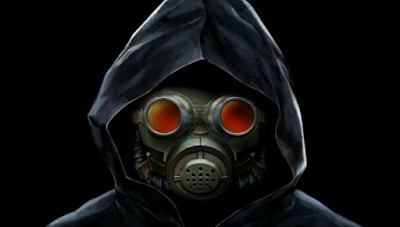 A.K.A. this happy looking fellow.

The game is split into distinct sections, with very different playstyles.  The vast majority of the game is closer to a visual novel rather than an interactive videogame.  The story follows the characters as they interact with each other and react to the events of the game.  The only input required from the player is to read and occasionally mash the A button to continue to the next screen.  That’s enough to alienate a good number of players, so it’s something that you need to be prepared for before purchasing the game.

The level of interaction with the controls is a blessing in disguise, though, because the controls in the sections that require more participation are fiddly at best.  It’s tricky to navigate between screens, and selecting items can be a time-consuming process.  At worst, the controls actively contribute to the difficulty level as you try and solve the puzzles, some of which are difficult enough already.  Some puzzle solutions are so obscure that there seems to have been no logic behind them, while others require codes and phrases which are available on one screen but give no warning that you need to write them down before being trapped in a second screen that you can’t exit out of without providing an answer.

Besides the occasionally infuriating solutions, the puzzle sections of the game are very similar to an escape room.  Sigma and a couple of his companions are locked in various rooms inside the warehouse and have to use the items found inside that room to solve puzzles to find the key and unlock the door.  So the gameplay is similar to an escape room, but one where – rather than your friends – you’re playing with a group of people that you don’t know or like, who don’t even try and participate and are content to sit back and criticise everything that you do.  Or maybe that’s exactly like your experience of an escape room – I don’t know, I don’t know your social circle.

Every character in the game has a different motivation, all of which are hidden to Sigma at the beginning of the game.  Sigma interacts with all of them throughout the course of the story, and finds that the cast ranges from unlikeable all the way through to unbearable.  Most of the characters do become more sympathetic as you uncover their backstories, and they in turn will warm to Sigma depending on the choices he makes during the course of the game. 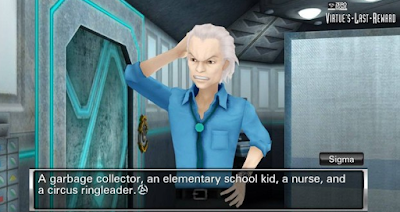 Hey now, let’s not forget the woman cosplaying as a stripperific ancient Egyptian pharoah
or the amnesiac locked inside a metal suit that conveniently covers his face…

This leads on to the next section of the game, and the choices that you can instruct Sigma to make.  After each escape, Sigma gets the chance to vote to either ally with or betray his teammates.  If one team betrays the other then that team wins a high amount of points, and if both ally then they share a lesser amount of points between them.  However, if both teams choose to betray then neither team get any points.  It’s a variation on the classic Prisoner’s Dilemma, which is explained within the game at some length. 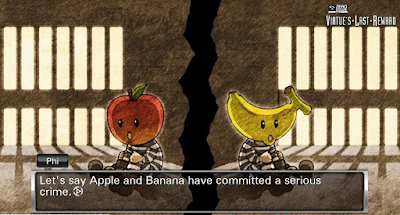 The dialogue in the game is usually set up to push you towards choosing to ally, or at least provide you wish a healthy dose of guilt if you choose to betray, but as some of the characters were so unlikeable there were times when I was stabbing at the betray button so enthusiastically it’s surprising the DS stylus didn’t snap.  Whatever your initial choices are when playing through the game, you will be forced to betray your teammates sooner or later.

Every choice the player makes in the game, such as whether to ally or betray, who to partner up with, or even which room to visit, affects the plot.  Each choice creates a split in the game’s timeline, and travel down one fork in the path.  Once you’ve played the game out to its natural conclusion, you get the chance to skip around the timelines, to see what consequences your choice created and what potentially could have happened instead.  It’s only by doing this that the player is able to piece together the mystery of what’s happened.

Basically this but more complicated and the diagrams are
colour-coded for your convenience.

The game gets far more interesting at the point where you’re set free to be able to explore other timelines.  In the first playthrough, the puzzle sections arrived at roughly one every hour, with long explanations of the rules to sit through in-between.  It doesn’t necessarily mean that you’ll start finding answers to the game’s questions – in fact, you’ll just start finding more questions – but this mechanic is what will draw you into the game.  It switches from making you impatient to wade through the endless dialogue and plot to reach the sections with the puzzles, to the reverse of wanting to rush through the puzzles to find out what’s going to happen next in the storyline.

Virtue’s Last Reward is not an easy game to like, but it is rewarding if you allow it to be.  The novel parts of the game are long, and it takes a good few hours of cycling through text before the game reaches a threshold where it starts to become interesting in its own right.  When you reach a stage where you’re allowed to contribute and the game isn’t just content to play amongst itself, the puzzle mechanics and controls can be annoying and the solutions can be illogical.  All of these are the cost of entry.  If you’re willing to accept these, then what the game does have going for it is depth.

There’s at least thirty hours of gameplay if you want to uncover every ending (of which there are more than twenty) and if you become invested in the storyline then you will want to unlock them all, as that’s the only way to piece together the answers to the many questions.  You’re expected to invest a lot of your time and brainpower into the game, and it doesn’t make it easy by spelling out the solutions for you. Despite some of the games more ...outlandish concepts...such as buying into the possibility of concepts like time travel and telepathy, it references and gives an explanation of real life philosophical and scientific concepts along with an analysis of a particular kind of game theory.

The story is compelling, with all of the characters having their own personalities and motivations, which is what causes the conflict rather than the dangerous situation that they find themselves in.  There are times when you’ll be shouting at your console to ask why the characters can’t all co-operate and share the points to all be able to escape, but that would make a far less interesting game.  And probably a far shorter one. 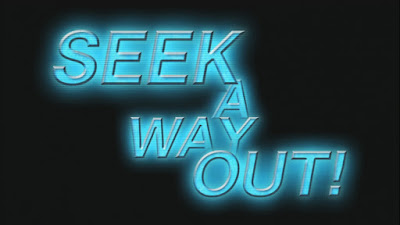 Seek a way out!  Of the game… of this review…
whatever, just get out while you can.