Exciting Escapes has been open in Southampton since November 2016, and offers a selection of espionage-themed games, all set over the past few decades.  Although it’s only been running a few months, it’s already expanding and a branch has been opened in Basingstoke town centre.  It’s only running one room at the moment, which is one that’s already on offer in Southampton, so unfortunately fans of the existing branch can’t head up the M3 to find new games to play.

The room that is running in the Basingstoke branch is their 50’s themed room.  Forget the glamour of rock and roll and Marilyn Monroe; this is set in a small flat in Basingstoke during the height of the cold war.  You play as agents who are tasked with infiltrating the apartment of a suspected foreign spy who is being held in custody.  Your mission is to track down missing evidence in order to secure his conviction before the apartment is wiped clean by Russian agents and the evidence disappeared, and you along with it.

Rather than the one room, the game is played in a set that is dressed up as an entire apartment.  The props used and the decoration look, on the whole, authentic to the 50’s time period.  Teams will have to unlock multiple areas during the hour, but managing to unlock a new room doesn’t move the focus solely to that new space – teams have to move back and forth and use all of the available space for the whole game. 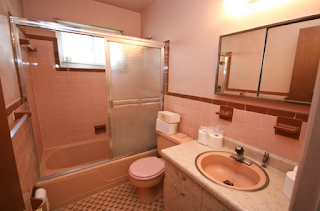 Fine, it’s not the whole apartment…

Where this room really shines is the immersion, and the authentic looking props are only the beginning of this.  As you investigate the flat, you uncover a story that paints a picture of the person you’re investigating and the rather sad story of his life.  It starts with the obvious surface details, such as his love of cars, and only gets more intimate from there.

Even the hint system helps maintain the immersion in the game.  In most games, however the hints are provided (be it via text, walkie-talkie or any other method), the staff contact intrudes into the world that the game has worked so hard to build.  The Exciting Escapes team have managed to get around that problem in a really creative way.  At any point where teams get stuck while executing their spy mission, they can use the phone in the apartment to call their team’s ‘handler’.  This means that they get to stay fully in character and it’s a fun and interactive way to ask for help.

Younger players may become confused by the lack of touchscreen and apps available.

The downside of this system is that you’re warned at the start of the mission that you can only call for help three times over the course of the game.  It isn’t clear what would happen if a new team is playing, or if a team that needs a lot of guidance gets stuck after using up their allocation of hints.  Hopefully Exciting Escapes have a contingency plan in place for this, rather than watching the team flounder for the rest of the hour through the CCTV.

It’s a valid concern, as there are a lot of puzzles to solve within the time limit.  While there are several shorter, quick-win puzzles, the overall standard isn’t easy.  It’s a game where a team of at least 4 is advisable unless you’re really experienced, as you’ll need to split off into smaller groups to work separately on some of the puzzles if you want to stand a chance of getting out in time.  On the other hand, although a decent size team is needed, a team of 6 is going to be uncomfortably close aside from the times when sub-teams can work in different rooms in the apartment.

In fact, there are so many padlocks to open in the game that each one has a symbol by them to show which puzzle corresponds to which lock.  It’s one of the few things that threatens the game’s otherwise excellent immersion, but it is needed.  If the symbols weren’t there for guidance, it would be a real struggle to complete everything in time.  Some of the symbols don’t make sense at first glance, but they become clearer as the game goes on. 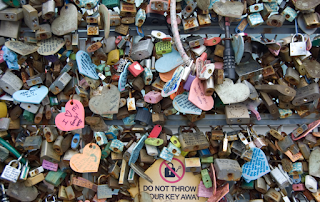 Okay, not quite this many padlocks.

The Basingstoke branch has only been open for 3 weeks, and the current success rate for the room is around 33%.  Although it’s been open for less than a month, it’s not clear how well some of the props are going to stand up to heavy usage over time.  For example, the game will have only been played a few dozen times, but one puzzle solution was given away because of wear to the furnishings.

My main hope for this room is that it breaks away from being in the shadow of the Southampton branch and forges its own identity.  The quality is already apparent with the first game, which is a copy of an existing Southampton one.  The game is fun, the atmosphere is excellent and the final puzzle was unexpected and had us genuinely perplexed.  At the moment, though, it is just a copy and paste of the Southampton version.  Although I haven’t been lucky enough to visit the Southampton branch (yet), the waiting area is shown as being welcoming and spacious.  The entrance and waiting area in the Basingstoke branch is…slightly less so.  Hopefully with time this branch will develop its own style and flourish.

Pictured: not the Basingstoke branch.