Live Escape Game has a number of sites across Switzerland, and they offer a different selection of games across the loactions.  Some of these have interesting concepts, such as a Cinemania room for film buffs, and one set in an abandoned train station.  Zurich has four rooms currently, most of which feature fairly traditional escape scenarios, such as a heist and a prison break.  The game we were there to play, Steps, is apparently the game at the Zurich branch which has the most riddles to solve.  Despite that, and the room’s 50% success rate for mid-size teams, it’s not actually the most difficult.  That award goes to their Prison Break game.  However, Steps is the one with a much more abstract theme, which should draw in anyone looking for something a bit different.  It’s designed with no story in mind, but centred around a ‘magic and music’ theme.

The room’s design is one of the strong points.  It’s not quite as surreal as a room designed by MC Escher or Salvador Dali – as much as I would love to play that – but the aesthetic is quite stylised and playful. 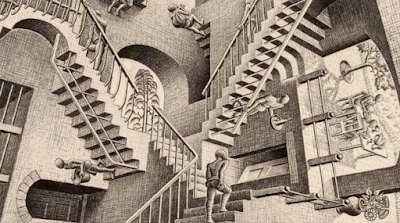 Google says there are a few Dali rooms out there, but I guess physics needs to catch up
a bit before there could be a decent Escher room…

It’s not just the design of the room; the puzzles are stylised as well.  They all have a real sense of fun to them, and they fit well with the musical and magical theme.  You get the sense that the person in charge of watching the cameras would be laughing at watching teams attempt to solve some of puzzles (or at least the first dozen or so times – it probably gets repetitive after a while).   Most escape rooms are based solely on logic and reason, and while it is the same here, you’re asked to do things that on the surface seem slightly less than rational.  You just have to trust in the instructions and remember that one of the themes of the room is magic!

The beginning half of the room is creative and whimsical, but as the game progresses it loses some of that feeling along the way and slides more into the usual escape room fare of padlocks and codes.  Although it loses some of the sense of magic, the room remains fun the whole way through.  It’s also one of the few examples of a room that’s extremely linear but still enjoyable to play, although maybe better for a smaller team.

While it’s a fun room, that doesn’t mean that it’s without its drawbacks.  The hint system was one of the strangest we’ve encountered.  You’re able to call through to the host if you need a hint, and hints are also displayed on a screen in the room.  This all sounds so normal so far, but the hints that show up have absolutely no bearing on the puzzle that’s being worked on.

A few times the hints on the screen actually tricked us into thinking that we had missed something, and we went back and spent time looking at puzzles we’d already solved.  After a while, we realised that the hints were given on a timed basis and just ignored them.  The only slight benefit to these unnecessary distractions was that they could be used as a benchmark for what part of the game you should be working on if you want to be on track to make it out in time.

The host of the game had recommended in the introduction that we take pictures of the hints in order to refer back to them later, as they couldn’t be replayed once they’d appeared on the screen.  This is presumably to help teams who are working at a slower pace, in case the hint is displayed before they’d reached that point of the game.  The timed hints are an odd concept, and seem to have more potential drawbacks than benefits, but it’s even odder that unlike any other escape room out there, you’re actively encouraged to use your phone during the game.  It wasn’t only to take pictures of the hints; the beginning part of the room is set in quite a dim light, and we were again encouraged to use the flash light function on our phones while exploring. 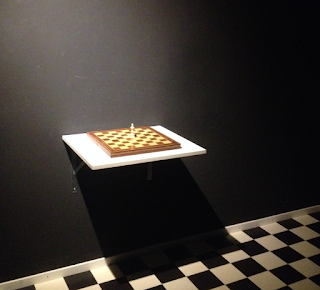 The company has a few ways of working that are a little bit different than normal, but then room isn’t without its charm, and the whole premise of Steps is supposed to be based around things being a little out of the ordinary and off-kilter.

Price:  49.5 CHF per person for a team of 2, decreasing from there
Players:  2 – 6
Strengths:  Theme and design
Weaknesses:  Hint system