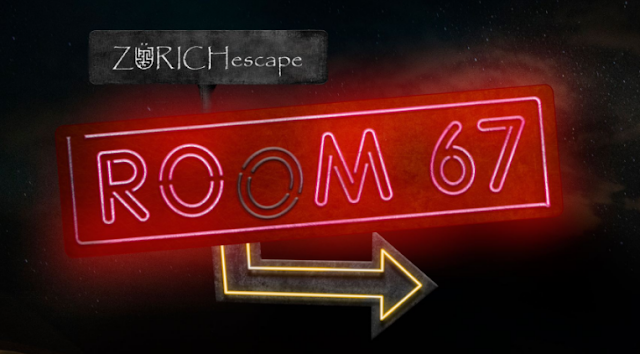 Room 67 is the newest of ZURICHescape’s rooms, and it’s actually located a good half an hour walk away from its main site, situated inside the Zurich City West branch of Novotel.  Even though this is clearly stated on their website before booking, and again on the confirmation email, it still felt strange to be walking into a hotel in search of an escape room.  When you enter the building, any worries like that are put aside as it’s made clear that you’ve made it to the right place when you’re greeted by a large poster featuring Room 67 in the centre of the foyer.

Having made it to the right hotel, it’s not actually apparent where to go from there.  To save having to ask at the main desk, the room is situated on the first floor, almost immediately next to the staircase and lifts, and is marked by a smaller Room 67 poster.  There’s a small lobby area to wait in, which is good as you may need to wait a while to be greeted.  There’s only one ZURICHescape employee at the location, and they’re likely to be off in an adjacent room monitoring the game in progress and unaware that you’ve arrived.  For us we were waiting long enough that the worries over whether we were in the right location resurfaced.

As the time that we were booked to start our game came and went, we knocked on the room door and got no response.  We found out afterwards that we had been knocking on the door of the actual escape room, and interrupting the game in progress!  We even got a couple of knocks in response back through the door, which must have meant that they thought we were part of the game.  Although I felt guilty at the time, it’s actually the company’s responsibility to make sure that customers are greeted and one group can’t inconvenience another.  The confirmation email doesn’t give any directions about where to wait, asks you to arrive early and then when you follow these instructions there’s no procedure in place to make sure you’re greeted.

Once the previous group had finished, even in spite of our ‘assistance’, it was our turn.  Two be fair to our host, once he only had the one group to deal with he was attentive and helpful.  The introduction to the game we received was funny, even with a slight language barrier.  Plus, when we visited the main location of ZURICHescape we discovered that the management of Room 67 was, in comparison, like a well-oiled machine.  Because we were playing in a hotel room rather than the company premises, the usual “please try not to break anything” speech felt even more heartfelt and detailed than usual.

The game is set in a creepy, run-down motel which you’ve booked into for the night before realising that you’re the only guests in the building, and it might just be a good time to retreat back to the car, lock the doors and just carry on driving.  I do wonder if ZURICHescape managed to convince Novotel to host their game before letting them know the theme, as I’m surprised they’d want to be associated with that.

One of these rooms is a clean and airy, with all standard mod-cons.  One…..isn’t.

The decoration of the room was of a really low standard, and by that I mean that they’d decorated it in just the right way for a derelict and seedy motel.  It’s complete with flickering neon lights at the windows, which does mean that you’ll spend the entire game working in a very dim light at best.  This seems to be a trend for a lot of escape rooms in Zurich, where a low level of light artificially ramps up the difficulty, making it difficult to see details such as colours and smaller writing.  Luckily at least in this room you’re provided with a torch, which is a luxury you don’t always get.

The main thing that sets this room apart from most other games was the lack of padlocks.  There are the usual amount of locks that need to be opened, but they all require thinking outside the box, rather than being opened by finding a good old-fashioned key or code.  Opening the locks often required finding items around the room to place in the right position for the mechanism to be released, which is something that’s advised before the game to point you in the right direction.

Although it’s very creative, the room was sometimes too clever for its own good.  For example, there were two occasions where we had completed the puzzle correctly, but nothing happened.  This was either because something had been broken by a previous team, or just that the items needed to be placed, re-placed and then placed again before the precise locking mechanism decided that the items had been placed exactly enough.  If you’re playing the game and can’t make any more progress, even though you think you’ve taken the right steps, it’s worth using the walk-talkie provided to check if you’re on the right track or if the lock is just being temperamental.

Stuck?  Try half a millimetre to the left, holding your breath and praying.

Room 67 does have some exciting and different ideas for an escape room, including the location, theme and the method of solving the some of the puzzles.  It falls down in the execution slightly, and in the management of the room.  There aren’t many reviews where I feel the need to give so many tips about how to get a decent experience from the room – including the location, where to wait, when best to ask for hints.  It’s up to you whether you think that it’s worth giving the room a chance.

Price:  44.95 CHF per person for a team of 2, decreasing from there
Players:  2 – 6
Strengths:  Unusual puzzles
Weaknesses:  Management of the room