The Cardiff branch of Escape Reality is advertised by a discreet black sign next to a discreet black doorway.  Although it’s in a central location in Cardiff town centre, we actually managed to walk past the venue three times before we noticed it.  Once you make it inside, it's a large venue spread across multiple floors of the building.  You're directed by arrows up to the reception, which was really more of a bar area.  The bar's fridge was well-stocked with prosecco for those teams who want to celebrate their escape, and anyone who doesn't make it out in the time limit has a handy place to drown their sorrows.  Despite this set-up, it didn't really feel like a comfortable area that you'd want to spend time in, and the bar was really just a glorified waiting area.

Escape Reality is one of the larger escape room companies, with six branches across the UK and a handful of locations abroad.  At this branch at least, there was a wide selection of games available, with most of their games getting their inspiration from existing franchises.  There was Enigmista, which was a play on the Saw films, and Fibonacci, which was based off of every single Dan Brown novel ever (but more specifically The Da Vinci Code).  There was also a game called Misery, for which they didn't even bother to change the name.  We avoided that one, because personally I enjoy having both my ankles facing in the right direction. 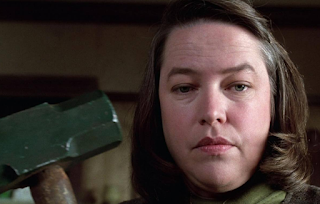 Little Stephen King joke for you there.

We were booked in to play Jumangi.  Excuse me - Jungala.  We were there to play Jungala.  As the title suggests, the room’s theme was that you were transported into a jungle through a magical boardgame.  I've read reviews before which suggested that the decoration of the room was lacking, but that was based on an experience in a different location and at Escape Room Cardiff the decoration was perfectly serviceable.  Admittedly it wasn't particularly immersive, but then it's much harder to create a convincing jungle than it is an office or laboratory.

Considering the theme, it's not surprising that this is Escape Reality's family friendly game.  Children should enjoy the jungle theme, along with the animals and boardgame elements, and adults can enjoy a little nostalgia for a childhood film.  If there aren't any children involved, then you'll only need a small team.  However, it is well designed to engage younger players.  There's a fair amount of searching involved, none of it particularly strenuous, and the mental puzzles have slightly more direction provided than is usual in an escape room.  For example, if a four digit padlock's combination needs to be worked out through four related puzzles, then Jungala is kind enough to demonstrate how to solve the puzzle by completing the first step and providing the first digit of the combination for you.  All these touches combine to create a room which is accessible enough for children to really enjoy.

We sped through all of the puzzles, but did use a hint towards the end, if only to experience the hint system which we had been warned about by so many people.  At the beginning of the game, the team is provided with a tablet computer.  This tablet is used as a timer (which is fairly standard) but also as the entire hint system (which isn't).  Every puzzle in the game has a QR code stuck nearby, and scanning the code will bring up a hint on the tablet to help with that puzzle.  This gives teams full control over when to get assistance when they're stuck.  That’s the kindest thing that I can say about it, because automating the process comes with a whole host of downsides.   It's incredibly immersion breaking, for a start, when there are black and white boxes plastered all over the jungle. 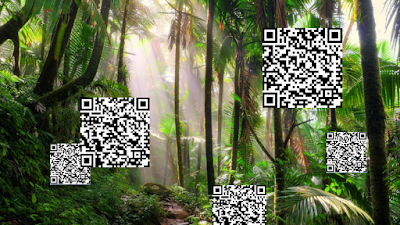 When we requested our hint, what we received was less of a clue and more of a full walkthrough of the initial part of the puzzle along with a full step-by-step guide to completing the rest of it. The system isn’t intelligent enough to know what part you need help with, so any time a hint is requested, there’s a risk that what's provided might not have any bearing on the part of the puzzle that's causing the difficulty.  The guidance will either be far too detailed or altogether irrelevant, and the app can’t react and provide help if the puzzle is actually broken or not working as expected for any reason.  A person monitoring the game would be able to provide information tailored to the situation in order to get the team back on track without feeling like they’ve been spoon-fed the solution.

There are also practical downsides to their system - once you've requested a hint, you're locked out from requesting another for the next ten minutes. Plus, every hint requested adds an extra 5 minutes to your total escape time at the end. Considering that there's a button near the entrance which can call a staff member for help without a penalty, why is there the need for the automated system?  Room Escape Artist (no relation) covered the topic of QR Codes in escape rooms in a recent article if you’re interested in reading more about this. 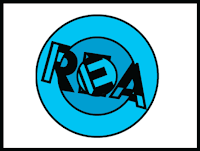 Considering the article is called ‘How Escape Room Boss Destroys Fun in Escape Rooms’,
it’s safe to say they’re not a fan.

When you finish the game, the QR scanning system comes into play again.  Even though you've escaped, the timer will keep counting down until you scan the final QR code to stop the clock.  After that...  nothing.  There’s no Escape Reality employee there to congratulate you, go over the bits you enjoyed or debrief you on any of the bits you didn't quite understand.  It turns out nothing makes that feeling of success deflate quicker than a lack of post-game support.  You're left to your own devices to make your way back to the reception area where they'll take a quick photo.  This might be more efficient for the company, but it makes for about as friendly and personalised an experience as using a self-service checkout at the supermarket.

Don't get me wrong, Jungala is fun - there was a point where I had to stop playing for a minute because I was laughing too hard to carry on - it has a variety of puzzles and will be perfect for a family team.  But I still feel that something important is lost from the escape room experience when customers start to be treated as wallets being moved along a conveyer belt.  Hopefully this business model isn't a sign of what's to come as the escape room industry continues to grow and bigger companies enter the market.