The first thing you’ll probably notice about Inkwell Investigations is the sheer amount of effort they’ve gone to in constructing their universe.  Their website builds a rich, whimsical and funny backstory for their game, covering the characters, lore and even geography.  There’s a character page and even a sample of some of the riddles that they dream up and post daily on their facebook and twitter accounts.

The second thing you’ll notice is that Inkwell Investigations are slightly different to regular escape rooms…in that there’s not actually any room to escape from.  The game takes place in a public park.  It’s a very different atmosphere to a regular escape game, but it doesn’t take long before you forget all about being in public and get drawn into the story.  It helps that Inkwell Investigations have chosen their location well, so the game takes place in a secluded area with hardly any foot traffic.

There must be a few different challenges to hosting an escape game in public, but the company really seem to be prepared for anything.  It started drizzling during our game, and umbrellas were suddenly produced from nowhere.  If it’s already raining, the game is portable enough that it can be moved to a nearby pub.

The main difference that affected us was the lack of usual amenities before the game started.  There are no lockers to store belongings in to prevent them getting in the way… and more importantly there are no bathrooms.  The first problem can easily be avoided by using over-the-shoulder bags or rucksacks rather than handbags.  But for the second problem, unless you plan on catheterising yourself, make sure you’ve visited a bathroom before you make your way to the game’s location.  They’re only minor practical points, and it’s a small trade-off to make for the chance to experience this game. 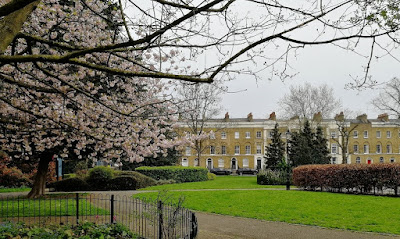 Plus it’s a fairly picturesque playground.

The game itself is called Murder History.  It focuses on the time machine belonging to the legendary, possibly even mythological Lord Inkwell.  The time machine has been sabotaged by a member of the group, and now the entire group has been stuck in a perpetual time loop.  You’ll need to work together to fix the broken machine, escape the past, and work out who the saboteur was.

The majority of the game is spent trying to open the time machine itself, which to the casual observer looks like a small wooden box.  As that’s quite a small item for everyone in the group to work on, there’s a danger that the entire team will be getting in each other’s way.  However, there are enough puzzles to solve concurrently that it isn’t a problem for the majority of the game – everyone can split into smaller groups to work on different things.  If the fact that they create and publish riddles every single day didn’t tip you off, all of the puzzles are clever and often based around language and symbols.

Those aren’t the only types of puzzle though.  There’s a whole park to explore, and again Inkwell Investigations have used this to their advantage.  There are clues and items hidden all around that need to be found.  It’s a great way to use the space, stop players being bunched up together in the same place, and also to bring a family-friendly aspect to the game so that younger players can go out investigating and still contribute to the fun. 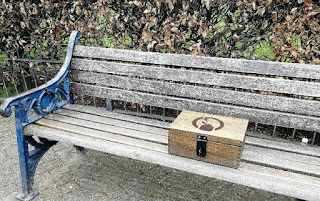 Murder History is designed for 3 to 8 players, but I’d say the optimal number of players would be 4 or 5.  We would have struggled with only 3 people, and when you get a bigger team of any more than 6, there may not be enough for everyone to do at some points.

Another difference with this game is that the moderator is there with you at all times.  That’s a fine line to walk, but we never felt like he was hovering or being intrusive.  We were supplied with gentle hints and nudges when it was needed, it meant that any items or bits of paper were quietly tidied away when they were no longer necessary, and most importantly he made an excellent Umbrella-Holder-In-Chief.

The game moderator was a big part of the strongest element of Murder History, which was the immersion.  Inkwell Investigations have created a fantastical world for you to play in, and it’s up to you how much you want to interact with this.  The game is totally strong enough to stand on its own, but you’ll get more out of it by diving in.  Every member of the team gets to pick a character at the beginning of the game, and at the end, having spent the last hour building an understanding of the relationship between each character, you get the chance to try and figure out who the saboteur is, and publicly accuse them.

Inkwell Investigations have built more than just a game here; they’ve built a whole universe.  This is just the first instalment, and even as a first attempt it’s brilliant.  I can’t wait for them to release their next game, so that I can experience their unique blend of time-travel, humour and puzzles again.

Robin Bates said…
Lovely review. We were lucky to have it hosted in a nearby pub so we had access to toilets, and the all important gin.

Sadly one of the elements of our box was broken - we had been given an incorrect piece so despite being well ahead of our colleagues we ended last.

Totally spoiled the event for us and as such our hardy gang of well-versed escapers couldn’t recommend it.