Homelessness is a really big problem in the UK (I know that’s a strange opening statement for an escape room review, but bear with me), and it seems especially bad in the busy town of Reading.  TimeTrap are based in Reading town centre, and they’ve decided to do their part to help.  The whole event is designed to raise money for a charity that supports the homeless.  More than that, it’s created to raise awareness of the scale of the problem and how people can help.

The game is called The Divide, and it’s a real departure from TimeTrap’s usual games.  Not only geographically, as it’s housed in a separate location, it’s also a move away from their usual style.  Their usual games are whimsical affairs, all based around time travel and the adventures of the hapless Professor Potch.  This game has a much more mature theme.  The challenge here isn’t to defuse a bomb, or escape from a cell, or create a vaccine, or any of the other typical plots in escape rooms.  Your task is to learn about our divided society, and consider how best to try and balance the inequality between the people who are secure, and those who are less fortunate. 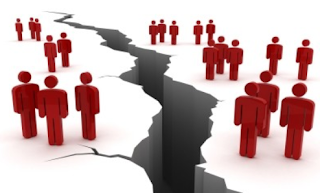 I promise the game isn’t nearly as pretentious as my description of it made it sound.

Although it’s for a good cause, any escape room still has to stand on its own merits.  As to be expected from TimeTrap, it’s an excellent room.  It’s well put together, with really good puzzles that all fit the theme.  You’re able to split the group to work separately or in smaller teams throughout much of the game, so nobody will be left without anything to do.

The entire game is free of padlocks, which is a novelty in the escape room industry and without being able to rely on four-digit codes it forces the creators to be much more inventive in how to make the game flow.  Everything works smoothly, which is important in padlock-free games; while it should lead to a more fun experience for players, it can also have the opposite effect and become exceptionally frustrating if they don’t work when they should.

TimeTrap have put an awful lot of thought into the puzzles and the decoration.  Everything ties back to the theme, and there are many touches that show how much care has been put into the room.  We talked with the designers afterwards, and they were obviously proud of what they’ve created (and rightfully so!).  This care shines through in all of the little details, a lot of which we didn’t even catch in our playthrough.  The room is a pop-up event, so it would have been good to see what they could have created had this been a permanent fixture.  There are a couple of design points that could have been tighter, as the ‘divide’ in the room isn’t overly clear, but it gets the message across clearly. 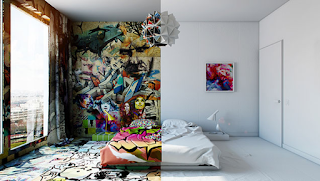 I’m not saying it has to be quite this on-the-nose, but...

The Divide is a top-quality game, but it seems strange to describe it as ‘fun’ considering the theme.  The game is centred around homelessness and its many causes, such as relationship breakdown, class and disability.  It can hit a little close to home, especially when you have friends who have had to make the choice between keeping themselves warm or keeping themselves fed, who have had to visit foodbanks, who are too sick to work but have to jump through hoops to prove themselves disabled enough to be able to claim benefits.

So the room needs to balance sensitivity, raising awareness of poverty and homelessness, and then still be entertaining.  Even though it’s raising money for a good cause, TimeTrap still have to tread a fine line so that it doesn’t feel like a case of poverty tourism.  They’ve managed this well, and the room doesn’t feel at all disrespectful, or go too far in the other direction and become preachy.

They’ve accomplished this by working closely with Launchpad, a local homeless charity, through every stage of the game’s design.  Launchpad are the charity that will receive 20% of the game’s booking fee – 10% of the fee is donated by TimeTrap themselves, and within a week of the game being launched it was announced that this amount would be matched by an anonymous donor.

The Divide is only running for three months, so please get down to Reading while you have the chance.  You’ll be able to play an entertaining, interesting room which will make you think, and you’ll be able to support a good cause while you play.

Website: www.timetrapescaperooms.com
www.launchpadreading.org.uk
Price:  £30 per person for a team of 2, decreasing from there
Players:  2 – 6
Strengths:  Engaging theme and puzzles
Weaknesses:  Some clarity on the design, venue isn’t accessible for those with some disabilities