The White Room is one of those games that you have to play if you’re in Budapest.  It has a reputation as one of the best and one of the most difficult, and it always gets an honourable mention in any conversation about the many escape rooms available around the city.

Gozsdu Mission is located in Gozsdu Court, which is an area full of restaurants and bars and music and life.  The company itself is located in a small and unassuming basement.  We were met by the host, who was friendly and spoke good English, but there wasn’t anything special about this game until we stepped into the room.

The White Room is exactly as advertised.  It’s an empty white room with almost nothing to see.  There are pictures frames on the walls, but they’re only framing more empty space. The key you need to escape is the one thing that is in plain view, almost tantalisingly so – but it’s suspended from a chain in the ceiling and won’t reach the lock.  It’s the perfect blank canvas to project puzzles on to. 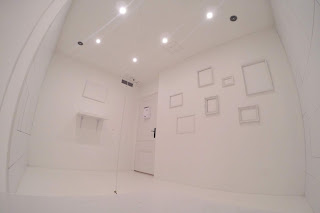 Please don’t look directly at this image for more than 5 seconds
at a time; you’ll get snow-blindness.

Some escape rooms have routine puzzles but a memorable story which elevates the game above average.  Here, there’s no story or theme to hide behind, so the entire experience hinges on the quality of the puzzles.  Fortunately, they’re all excellent.  After some initial exploration, the puzzles are mostly maths and logic-based.  There is some slight outside knowledge needed, but it isn’t a major component.

The game is 90 minutes long, rather than the standard hour.  This expanded time limit gave the puzzles more room to breathe rather than the whole experience being a manic rush.  Teams with a great deal of experience in playing escape rooms shouldn’t need anywhere close to 90 minutes, but it’s nice to feel like you have the extra time.  At one point I found myself sitting on the floor away from everyone else working out a minor logic problem for a good five minutes, which is a luxury I would never usually allow myself when the clock is ticking.

Their website recommends the game for four to seven players, and the success rate is apparently 20% for teams of four.  Even if you come in a team of seven, and for less experienced teams you’ll probably need the numbers, there’s enough going on that there’ll always be something to do, so larger teams will be able to split up and concentrate on separate things.  Or, if one person wants to separate from the group altogether there’s a good mixture of smaller puzzles along with the meatier ones.

This is a classic room with excellent puzzles.  Escape room enthusiasts get the chance to enjoy a famous game in the same way a connoisseur would saviour a fine wine.  For beginners, don’t let the low success rate put you off.  Budapest has a huge range of escape rooms all over the city, and if you’re only going to be playing one or two then this is a great choice.  The whole emphasis is on the puzzles rather than the frills, and it works.

Price:  5,000 HUF per player for a team of 2, decreasing from there
Players:  2 – 7
Strengths:  Quality of puzzles
Weaknesses:  Some outside knowledge needed